Description - By Any Means by Ben Sanders

The second novel from emerging talent, Ben Sanders, sees Detective Sergeant Sean Devereaux and private investigator John Hale at odds once again with Auckland city's criminal underbelly.
'... a triumph of gritty, page-turning, good old crime writing ...' M2 MAGAZINE Friday rush hour, Auckland city. A lone shooter fires across a packed street and kills a man. Detective Sergeant Sean Devereaux is assigned the case. He's not complaining-his Friday nights are seldom better spent.But the inquiry is not straightforward. Witness accounts are conflicting. the dead man appears to be an unintended victim, with the true target unknown. that's the least of Devereaux's worries, though. His current case load includes an investigation into the deaths of the wife and daughter of a wealthy finance company director. His examination has revealed the situation is far more complex than anticipated, casting real doubt upon the division of innocence and guilt. Devereaux's former colleague, John Hale, is in no position to help. Hale is occupied with his own pursuit of darkness, made all the more sinister by a dogged senior police officer determined to engineer his ruin. together the two men hunt for the truth from those who pursue self-gain by any means.

Other Editions - By Any Means by Ben Sanders 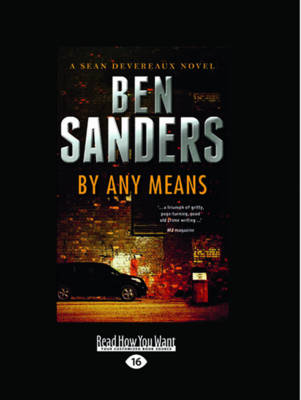 Book Reviews - By Any Means by Ben Sanders

» Have you read this book? We'd like to know what you think about it - write a review about By Any Means book by Ben Sanders and you'll earn 50c in Boomerang Bucks loyalty dollars (you must be a Boomerang Books Account Holder - it's free to sign up and there are great benefits!)

Ben Sanders is a 21-year-old university student who lives on Auckland's North Shore. He has been a keen writer since his early teens and his debut novel, The Fallen, was published to high acclaim in 2010. This is his second Sean Devereaux novel.