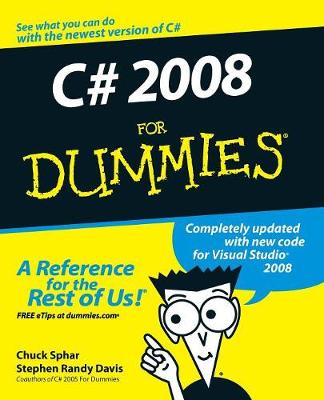 Whether you?re a total novice or a programmer shifting to C#,
the newest version of this programming language is full of cool
features you?ll want to use. With its Visual Studio
compatibility, C# is the perfect language for building Windows
Vista applications. And the 2008 version works with LINQ, a query
language with syntax similar to SQL but which simplifies database
code and can also write queries on XML files.
For the best basic C# how-to, it?s hard to beat C# 2008
For Dummies. This plain-English guide to programming with C#
can have you creating your first console application before you
finish Part I. In fact, the basic template you create at that point
will be the foundation of many other apps as you move through the
book. Along the way you?ll get the scoop on organizing your
data, object-oriented programming (also known as OOP), and a great
LINQ-related feature called delegates and events. You?ll find
out how to

Work with loops and if statements

Use interfaces and object-oriented concepts

Apply delegates and events, and much more

You?ll even gain some rare insight into how to understand
error messages you may get when programming in C#. All the code you
need can be found on the companion Web site, along with great bonus
information that helps you do more with C# 2008. So ? what
are you waiting for? Grab C# 2008 For Dummies and
let?s get started!

» Have you read this book? We'd like to know what you think about it - write a review about C# 2008 For Dummies book by Stephen R. Davis and you'll earn 50c in Boomerang Bucks loyalty dollars (you must be a Boomerang Books Account Holder - it's free to sign up and there are great benefits!)

Stephen R. Davis, who goes by the name of Randy, lives with his wife and son near Dallas, Texas. He and his family have written numerous books, including C++ For Dummies and C++ Weekend Crash Course. Stephen works for L-3 Communications. Chuck Sphar escaped Microsoft s C++ documentation camps in 1997, after six years hard labor as a senior technical writer. He s perpetrated three previous tomes, one on object-oriented programming for the Mac, one on Microsoft s MFC class library, and C# 2005 For Dummies, a revision of Randy s original edition. He s currently finishing a novel about ancient Rome (against rome.com) and gobbling great mouthfuls of .NET programming. Chuck can be reached for praise and minor nits at chuck@csharp102.info.

A Preview for this title is currently not available.
More Books By Stephen R. Davis
View All