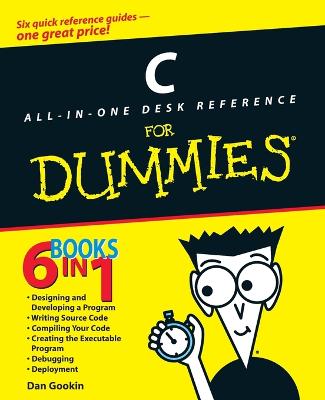 
The C programming language and its direct descendants are widespread and among the most popular programming languages used in the world today. The enduring popularity of C continues because C programs are fast, concise, and run on many different systems. Flexible and efficient, C is designed for a wide variety of programming tasks: system-level code, text processing, graphics, telecommunications, and many other application areas. C All-in-One Desk Reference For Dummies is for beginning and intermediate C programmers and provides a solid overview of the C programming language, from the basics to advanced concepts, with several exercises that give you real-world practice.


C All-in-One Desk Reference For Dummies covers everything users need to get up to speed on C programming, including advanced topics to take their programming skill to the next level. Inside you'll learn


The entire development cycle of a C program: designing and developing the program, writing source code, compiling the code, linking the code to create the executable programs, debugging, and deployment


Written in plain English, this friendly guide also addresses some advanced programming topics, such as


Programming for the Linux/Unix console


The book includes a handy appendix that shows you how to set up your computer for programming, how to select and use a text editor, and fix up the compiler, to ensure you're ready to work the author's examples. Written by Dan Gookin, the author of the first-ever For Dummies book (and several others) who's known for presenting complex material in an easy-to-understand way, this comprehensive guide makes learning the C programming language simple and fun. Grab your copy of C All-in-One Desk Reference For Dummies, so you can start coding your own programs.

» Have you read this book? We'd like to know what you think about it - write a review about C All-in-One Desk Reference For Dummies book by Dan Gookin and you'll earn 50c in Boomerang Bucks loyalty dollars (you must be a Boomerang Books Account Holder - it's free to sign up and there are great benefits!)

Dan Gookin has been writing about technology for 20 years. He has contributed articles to numerous high-tech magazines and written more than 90 books about personal computing technology, many of them accurate. He combines his love of writing with his interest in technology to create books that are informative and entertaining, but not boring. Having sold more than 14 million titles translated into more than 30 languages, Dan can attest that his method of crafting computer tomes does seem to work. Perhaps Dan?s most famous title is the original DOS For Dummies, published in 1991. It became the world?s fastest-selling computer book, at one time moving more copies per week than the New York Times number-one best seller (although, because it?s a reference book, it could not be listed on the NYT best seller list). That book spawned the entire line of For Dummies books, which remains a publishing phenomenon to this day. Dan?s most recent titles include PCs For Dummies, 9th Edition; Buying a Computer For Dummies, 2005 Edition; Troubleshooting Your PC For Dummies; Dan Gookin?s Naked Windows XP; and Dan Gookin?s Naked Office. He publishes a free weekly computer newsletter, ?Weekly Wambooli Salad,? and also maintains the vast and helpful Web site www.wambooli.com.

A Preview for this title is currently not available.
More Books By Dan Gookin
View All