From the very beginning, Caesar's story makes dazzling reading. In his late teens he narrowly avoided execution for opposing the military dictator Sulla. He was decorated for valour in battle, captured and held to ransom by pirates, and almost bankrupted himself by staging games for the masses.As a politician, he quickly gained a reputation as a dangerously ambitious maverick. In a string of spectacular victories he conquered all of Gaul, invaded Germany, and twice landed in Britain - an achievement which in 55BC was greeted with a public euphoria comparable to that generated by the moon landing in 1969.In just thirty years he had risen from a position of virtual obscurity to become one of the richest men in the world, with the power to single-handedly overthrow the Republic. By his death he was effectively emperor of most of the known world.

Other Editions - Caesar by Adrian Goldsworthy 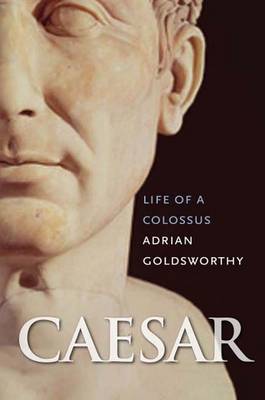 » Have you read this book? We'd like to know what you think about it - write a review about Caesar book by Adrian Goldsworthy and you'll earn 50c in Boomerang Bucks loyalty dollars (you must be a Boomerang Books Account Holder - it's free to sign up and there are great benefits!)

Adrian Goldsworthy has a doctorate from Oxford University. His first book, The Roman Army at War was recognised by John Keegan, the general Editor of The History of Warfare, as an exceptionally impressive work, original in treatment and impressive in style. He has since written five other books, to great acclaim.