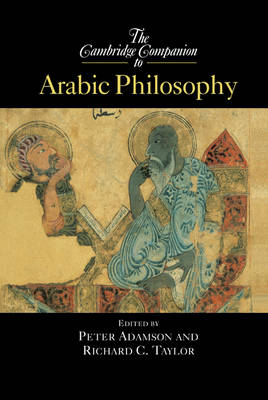 The Cambridge Companion to Arabic Philosophy

Description - The Cambridge Companion to Arabic Philosophy by Peter Adamson

Philosophy written in Arabic and in the Islamic world represents one of the great traditions of Western philosophy. Inspired by Greek philosophical works and the indigenous ideas of Islamic theology, Arabic philosophers from the ninth century onwards put forward ideas of great philosophical and historical importance. This collection of essays, by some of the leading scholars in Arabic philosophy, provides an introduction to the field by way of chapters devoted to individual thinkers (such as al-Farabi, Avicenna and Averroes) or groups, especially during the 'classical' period from the ninth to the twelfth centuries. It also includes chapters on areas of philosophical inquiry across the tradition, such as ethics and metaphysics. Finally, it includes chapters on later Islamic thought, and on the connections between Arabic philosophy and Greek, Jewish, and Latin philosophy. The volume also includes a useful bibliography and a chronology of the most important Arabic thinkers.

Other Editions - The Cambridge Companion to Arabic Philosophy by Peter Adamson » Have you read this book? We'd like to know what you think about it - write a review about Cambridge Companion to Arabic Philosophy book by Peter Adamson and you'll earn 50c in Boomerang Bucks loyalty dollars (you must be a Boomerang Books Account Holder - it's free to sign up and there are great benefits!)