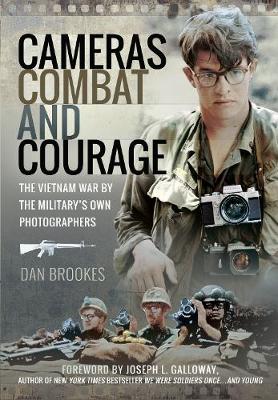 Cameras, Combat and Courage: The Vietnam War by the Military's Own Photographers

Description - Cameras, Combat and Courage: The Vietnam War by the Military's Own Photographers by Dan Brookes

What was it like to be a military combat photographer in the most photographed war in history the Vietnam War? Cameras, Combat, and Courage , a companion volume to "Shooting Vietnam", takes you there as you read the firsthand accounts and view the hundreds of photographs by men who lived the war through the lens of a camera. They documented everything from the horror of combat to the people and culture of a land they suddenly found themselves immersed in. Some even juggled cameras with rifles and grenade launchers as they fought to survive while carrying out their assignments to record the war. Cameras, Combat, and Courage also finally brings recognition to these unheralded military combat photographers in Vietnam that documented the brutal, unpopular, and futile war. Firsthand accounts and photographs by military photographers in Vietnam from the mid-1960s to the early 1970s, Cameras, Combat, and Courage puts the reader right alongside these men as they struggle to document the war and stay alive while doing it although some didn't survive. The cameras around their necks often shared space with a rifle or grenade launcher that enabled them to stay alive while performing their assigned military duties, killing, if necessary, to survive. Often, during a brief respite from trudging through swamps and rice paddies or jumping from a chopper into a hot landing zone, they would wander the streets of villages or even downtown Saigon, curiously photographing a people and a culture so strange and different to them. It is these photographs, of a kinder, more personal nature, removed from the horror and death of war that they also share with the reader. The accounts in this book come from young men thrust into a conflict half way around the world, and all who had their own unique perspective on the war. Some were seasoned photographers before the military, others had only recently held a camera for the first time. AUTHOR: Dan Brookes is a writer, photographer, and graphic artist. His tour in Vietnam gave him the travel bug and he still takes to the road, ocean, and air the world over adding to his collection of stories and pictures for his next books and photo exhibits. In addition to many other things, has been the production manager of a Hollywood-based gambling magazine, piloted a riverboat through the Amazon where he helped establish schools in tribal rainforest areas, ran a catering business that fed some of the most famous rock stars on tour, co-founded a UFO research group, and recently retired from Apple where he was a computer solutions consultant. He lives in Connecticut. 360 colour and b/w illustrations

Buy Cameras, Combat and Courage: The Vietnam War by the Military's Own Photographers by Dan Brookes from Australia's Online Independent Bookstore, Boomerang Books.

Book Reviews - Cameras, Combat and Courage: The Vietnam War by the Military's Own Photographers by Dan Brookes

» Have you read this book? We'd like to know what you think about it - write a review about Cameras, Combat and Courage: The Vietnam War by the Military's Own Photographers book by Dan Brookes and you'll earn 50c in Boomerang Bucks loyalty dollars (you must be a Boomerang Books Account Holder - it's free to sign up and there are great benefits!)


A Preview for this title is currently not available.
More Books By Dan Brookes
View All