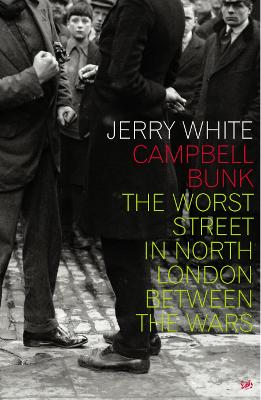 The Worst Street in North London Between the Wars

From the 1880s to the Second World War, Campbell Road, Finsbury Park (known as Campbell Bunk), had a notorious reputation for violence, for breeding thieves and prostitutes, and for an enthusiastic disregard for law and order. A street where strangers never went and where police were afraid to go alone, it was the object of reform by church, magistrates, local authorities, and social scientists, who left many traces of their attempts to improve what became known as 'the worst street in North London'. In all that record, the voice of Campbell Bunk itself was silent. Campbell Road was eventually cleared as a slum in the 1950s. Campbell Bunk provides insight into the realities of life in a 'slum' community, showing how it changed over a 90-year period. Jerry White uses extensive oral history to describe in detail the years between the wars, revealing complex tensions between the new world opening up (especially for young women) in Campbell Bunk and the street's traditional culture of economic individualism, crime, street theatre, and domestic violence.

» Have you read this book? We'd like to know what you think about it - write a review about Campbell Bunk book by Jerry White and you'll earn 50c in Boomerang Bucks loyalty dollars (you must be a Boomerang Books Account Holder - it's free to sign up and there are great benefits!)

Professor Jerry White teaches London history at Birkbeck, University of London. He is the author of an acclaimed trilogy of London from the eighteenth to the twentieth centuries. His most recent book is Zeppelin Nights, a social history of London during the First World War. He was awarded the honorary degree of Doctor of Literature by the University of London in 2005 and is a Fellow of the Royal Historical Society.

A Preview for this title is currently not available.
More Books By Jerry White
View All

Comparative Views of the Controversy Between Calvinists and the Arminians
$89.82 $99.80