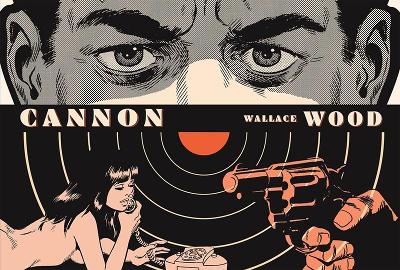 Cannon appeared in Overseas Weekly, a newspaper distributed exclusively to U.S. Military bases around the world. Uncensored by commercial editorial restrictions, Wood pulled out all the stops - producing a thrilling and salacious Cold War spy serial run amok with brutal violence and titillating sex, all in an effort to boost morale and support our troops! Initially brainwashed by the terrifying, voluptuous, and always half-naked Madame Toy to be "the perfect assassin" for the Red forces, Cannon was eventually rescued and brainwashed (again) by the CIA until he had no emotions whatsoever. Under the employ of our government's Central Intelligence Agency, Cannon experiences action like no other agent!

» Have you read this book? We'd like to know what you think about it - write a review about Cannon book by Wallace Wood and you'll earn 50c in Boomerang Bucks loyalty dollars (you must be a Boomerang Books Account Holder - it's free to sign up and there are great benefits!)


A Preview for this title is currently not available.
More Books By Wallace Wood
View All

The Walschaert Locomotive Valve Gear: A Practical Treatise on the Locomitive Valve Actuating Mechanism Originally Invented by Egide Walschaerts, with the History of Its Development by American and European Engine Designers, and Its Evolution Into the Mech
$92.47 $102.74