The story of the astonishing voyage of Captain James Cook and the Endeavour, to mark the 250th anniversary of that voyage, and Cook's claim to sovereignty.

In 1768 Captain James Cook and his crew set sail on a small British naval vessel, the boldly named Endeavour, bound for the Pacific Ocean. He was ordered to establish an observatory at Tahiti in order to record the 1769 transit of Venus, and - with the skills of naturalist Joseph Banks and his team - to collect natural history in this far part of the world. But Cook's brief also included a secret mission from the British Admiralty- to discover Terra Australis Incognita, an unknown southern land that might prove to be larger and richer than Australia.

Cook was not alone in this quest, and the Endeavour shared the Coral Sea and coastal New Zealand with an armed French merchant ship commanded by Jean de Surville. Eventually in 1770 Cook's ship crossed the Tasman Sea and reached the southern coast of New South Wales. Sailing north, he charted Australia's eastern coastline and claimed it for Great Britain. It was the most significant of Cook's voyages, transforming the world map and the way Europeans viewed the South Pacific Ocean and its lands and peoples.

On this 250th anniversary of his major discovery, Captain Cook's Epic Voyage reveals the hardships, adventure and achievements of Cook's most important voyage. Reshaping his previous book, Sea of Dangers, Professor Geoffrey Blainey takes us on a vivid journey, challenging accepted views and the intersection of myth, science and exploration. 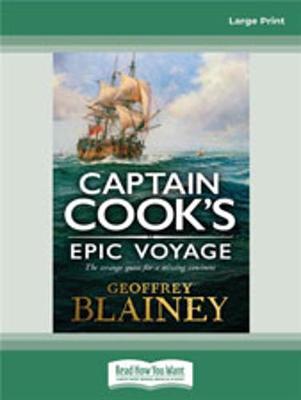 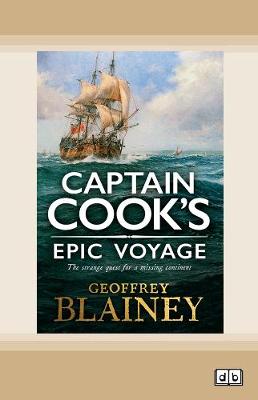 » Have you read this book? We'd like to know what you think about it - write a review about Captain Cook's Epic Voyage book by Geoffrey Blainey and you'll earn 50c in Boomerang Bucks loyalty dollars (you must be a Boomerang Books Account Holder - it's free to sign up and there are great benefits!)