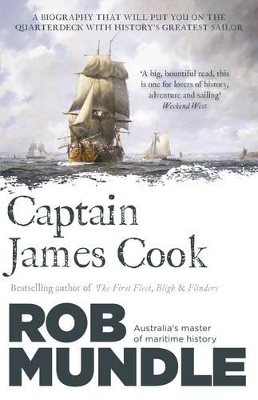 Captain James Cook is one of the greatest maritime explorers in world history. Over three remarkable voyages of discovery into the Pacific in the latter part of the eighteenth century, Cook unravelled the oldest mystery surrounding the existence of Terra Australis Incognita - the Great South Land. He became the first explorer to circumnavigate New Zealand and establish that it was two main islands; discover the Hawaiian Islands for the British Empire; and left an enduring legacy.

Rob Mundle introduces us to an unlikely sailor in a teenage Cook, who, through the combination of hard-won skills as a seafarer, the talents of a self-taught navigator and surveyor, and an exceptional ability to lead and care for his men, climbed the ranks of the Royal Navy to acheive legendary status among all who sailed and mapped the world.

» Have you read this book? We'd like to know what you think about it - write a review about Captain James Cook book by Rob Mundle and you'll earn 50c in Boomerang Bucks loyalty dollars (you must be a Boomerang Books Account Holder - it's free to sign up and there are great benefits!)

Rob Mundle OAM is a bestselling author, journalist and competitive sailor whose family heritage is with the sea, dating back to his great-great-grandfather, who was the master of square-riggers. Rob has spent a lifetime combining his passions for sailing and writing. He has written thirteen books - including the international bestseller FATAL STORM - reported on more than 40 Sydney-to-Hobart yacht races (and competed in three), and covered seven America's Cups, four Olympics and numerous international events. He is the winner of many sailing championships and has been a competitor in local and international contests.