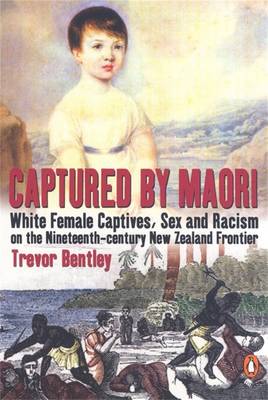 The capture of white women by Maori in the nineteenth century was often accompanied by high hysteria and moral outrage. Trevor Bentley tells these women's stories, including those of Charlotte Badger, Ann Morley, Caroline Perrett and Elizabeth Guard, exploring contemporary myths that all of these women were mistreated and held against their will. The white settler population was at once fascinated and appalled by these stories- what did the women have to do to survive, how did they live and, well, what about sex? The settlers were obsessed with the virtue of these women and in the retelling of their experiences most enjoyable aspects of living with Maori were suppressed. Bentley reveals that two of these women actually chose to remain in the Maori world.

» Have you read this book? We'd like to know what you think about it - write a review about Captured By Maori: White Female Captives, Sex & Racism On The Nineteenthcentury New Zealand Frontier book by Trevor Bentley and you'll earn 50c in Boomerang Bucks loyalty dollars (you must be a Boomerang Books Account Holder - it's free to sign up and there are great benefits!)

Trevor Bentley was educated at the universities of Auckland and Waikato and has a special interest in researching, teaching and writing about the interaction of Maori and Pakeha in pre-Treaty New Zealand. He is the author of two previous books, both published by Penguin- Pakeha Maori (1999) and Captured by Maori (2004). Bentley is an adult education manager for four colleges in the South Waikato, as well as an inveterate surfer and traveller. He lives in Tauranga with his wife Helen.

A Preview for this title is currently not available.
More Books By Trevor Bentley
View All