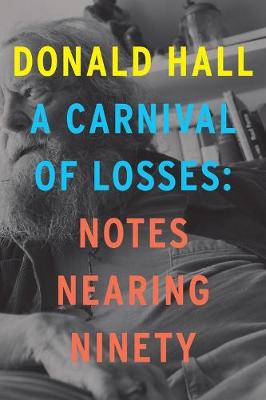 New essays from the vantage point of very old age, once again "alternately lyrical and laugh-out-loud funny," - from the former poet laureate of the United States (New York Times) Donald Hall has lived a remarkable life of letters, one capped most recently by the New York Times bestseller Essays After Eighty, a "treasure" of a book in which he "balance(s) frankness about losses with humor and gratitude" (Washington Post). Now nearing ninety, Hall delivers a new collection of self-knowing, fierce, and funny essays on aging, the pleasures of solitude, and the sometimes astonishing freedoms arising from both. He intersperses memories of exuberant days - as in Paris, 1951, with a French girl memorably inclined to say, "I couldn't care less" - with writing, visceral and hilarious, on what he has called the "unknown, unanticipated galaxy" of extreme old age. "Why should a nonagenarian hold anything back?" Hall answers his own question by revealing several vivid instances of "the worst thing I ever did," and through equally uncensored tales of literary friendships spanning decades, with James Wright, Richard Wilbur, Seamus Heaney, and other luminaries. Cementing his place alongside Roger Angell and Joan Didion as a generous and profound chronicler of loss, Hall returns to the death of his beloved wife, Jane Kenyon, in an essay as original and searing as anything he's written in his extraordinary literary lifetime. AUTHOR: Donald Hall, who served as poet laureate of the United States from 2006 to 2007, is a member of the American Academy of Arts and Letters and a recipient of the National Medal of the Arts, awarded by the president. SELLING POINTS: A beloved, preeminent man of letters, Donald Hall is a former U.S. poet laureate and recipient of the National Medal of the Arts, awarded by President Obama. Essays After Eighty achieved critical and sales success, with serialisation in The New Yorker and Playboy, sold 20,000 copies across all editions. Hall's A Carnival of Losses offers an even more uncensored journey into extreme old age: "Hall is caustic, funny, wise without being didactic, and even sexy" (Chicago Tribune). 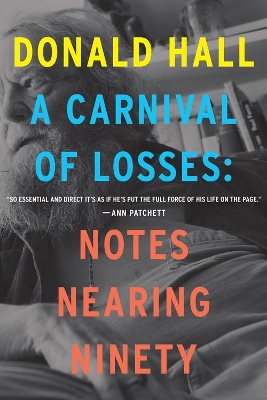 » Have you read this book? We'd like to know what you think about it - write a review about Carnival of Losses: Notes Nearing Ninety book by Donald Hall and you'll earn 50c in Boomerang Bucks loyalty dollars (you must be a Boomerang Books Account Holder - it's free to sign up and there are great benefits!)


A Preview for this title is currently not available.
More Books By Donald Hall
View All