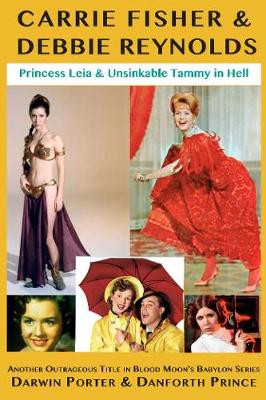 This hot, two-in-one biography examines the complicated co-dependencies of the greatest but most dysfunctional mother-daughter act in showbiz, Debbie Reynolds and her talented, often traumatized daughter, Carrie Fisher. After years of feuds and separations, they reunited at the end of their lives. Today, their legions of fans like to think they're each doing fine, together in some galaxy far, far away.

Debbie Reynolds and Carrie Fisher were the greatest mother-daughter act in show business. Frank Sinatra stole her virginity, but she married pop singer Eddie Fisher for the "official deflowering" (her words). Through storm and rain, Debbie battled on, hitting a high point when she starred as Tammy in 1957 and her most memorable role was in 1964, when she was cast in the rags-to riches saga of The Unsinkable Molly Brown. Each of her three marriages was a disaster, the second one to a millionaire shoe manufacturing mogul who bankrupted both of them. Impoverished after the divorce, she ended up sleeping in her car. Debbie mingled with the elite of Hollywood in the dying days of its Golden Age. Luminaries included Clark Gable ("if I were only twenty years younger....); Judy Garland (who propositioned her); Lana Turner; Bette Davis ("she was my daughter") and Glenn Ford, who fell in love with her.

A rebellious daughter, Carrie grew up to endure a life of living hell-pill popping, drug abuse, chronic anxiety, failed love affairs, bipolar disorder, and electroshock therapy. Carrie sometimes protested: "I don't want to be the daughter of Debbie Reynolds. I battled demons that set my brain on fire." International celebrity came in 1977, when she played Princess Leia in Star Wars as an elaborately coiffed intergalactic princess, spearheading "The Force," and strong enough to oppose the villainy of Darth Vader.

» Have you read this book? We'd like to know what you think about it - write a review about Carrie Fisher & Debbie Reynolds book by Darwin Porter and you'll earn 50c in Boomerang Bucks loyalty dollars (you must be a Boomerang Books Account Holder - it's free to sign up and there are great benefits!)

Hailed for their ability to skewer the inflated, long-standing myths and icons of show-biz, Darwin Porter and Danforth Prince are the world's most prolific and visible biographers of Hollywood celebrities. Residents of New York City, and winners of book awards from many literary competitions across the U.S., they're co-authors and co-producers of streams of written entertainment about how America interprets its celebrities.

A Preview for this title is currently not available.
More Books By Darwin Porter
View All

Burt Reynolds, Put the Pedal to the Metal: How a Nude Centerfold Sex Symbol Seduced Hollywood
$66.31 $73.68