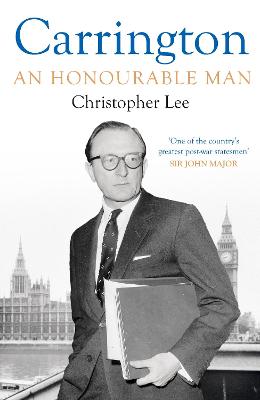 Lord Carrington was Margaret Thatcher's Foreign Secretary when the Argentinians invaded the Falklands in 1982. Absent in Israel on the eve of the invasion, he promptly resigned since it was, he said, a point of honour. He is seen by many today as the last of his breed in politics, an honourable man committed to public service.

The descendant of a famous banking family, Carrington served as a minister in every Conservative government from Churchill to Thatcher. In this full biography, authorised but not read by the subject, author of This Sceptred Isle Christopher Lee offers a fascinating portrait of a Tory icon whose career is a window into post-war British politics and life as a politician and diplomat.

He could be viewed as a typical Tory grandee, yet he disliked the Party, claiming late in his life that he was no longer a member, and could be fiercely independent. And there were recurring oddities in his career. He was forced to offer his resignation to Churchill for bad judgement over the Crichel Down Affair. As Navy Minister he was caught in the glare of a spy ring, and, though Defence Secretary, kept out of the loop of the military operation which culminated in Bloody Sunday.

Margaret Thatcher said there was something innately reassuring walking into a room where Carrington stood. Was this a barbed compliment? Did he in fact lack the steel required of a modern politician? He certainly represents a bygone era, as this vivid and expert biography shows.

» Have you read this book? We'd like to know what you think about it - write a review about Carrington: An Honourable Man book by Christopher Lee and you'll earn 50c in Boomerang Bucks loyalty dollars (you must be a Boomerang Books Account Holder - it's free to sign up and there are great benefits!)


A Preview for this title is currently not available.
More Books By Christopher Lee
View All