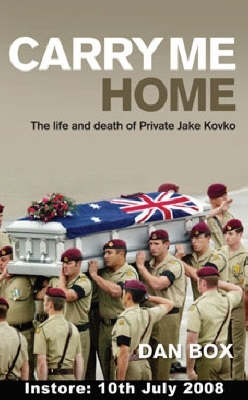 The Life and Death of Private Jake Kovco

'A cool-eyed and highly readable account of how a tragedy turned into a nightmare for an Australian family, victims of institutionalised dick-headery. Is this really the best we can do for those our government puts in harm's way?' GEOFFREY ROBERTSON QC

Jake Kovco was the first Australian soldier to die in Iraq: killed by a single shot to the head from his own army-issue pistol. Shockingly, his body went missing, and the corpse of a Bosnian carpenter was brought home in his place.

Nothing about Private Kovco's death nor the events that followed was simple: evidence from the scene of his death was lost, the Military Police themselves wrote large parts of witness statements, and his funeral became a political event. His family dismissed the military inquiry that followed as a cover-up and called for a coronial inquest they hoped would reveal the truth. It unearthed painful truths no mother should have to hear publicly said about her son.

Carry Me Home is the compelling inside story of Jake, the man and the soldier, including the two year investigation into his death and the systematic failure of the military's response.

» Have you read this book? We'd like to know what you think about it - write a review about Carry Me Home book by Dan Box and you'll earn 50c in Boomerang Bucks loyalty dollars (you must be a Boomerang Books Account Holder - it's free to sign up and there are great benefits!)

Journalist Dan Box is the recognised authority on the Private Jake Kovco's death having followed the story from the beginning. Dan works for the Australian newspaper and prior to coming to Australia, worked for London's Sunday Times .

A Preview for this title is currently not available.
More Books By Dan Box
View All