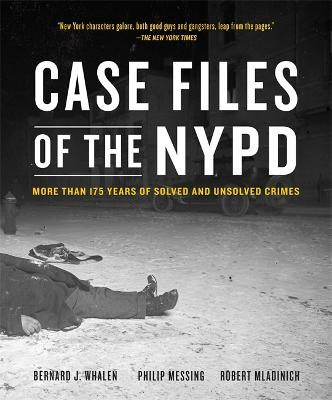 Case Files of the NYPD

Description - Case Files of the NYPD by Robert Mladinich

From atrocities that occurred before the establishment of New York's police force in 1845 through the terrorist attack on the World Trade Center in 2001 to the present day, this chronological visual history is an insider's look at more than 80 real-life crimes that shocked the nation, from arson to gangland murders, robberies, serial killers, bombings, and kidnappings, including: Architect Stanford White's fatal shooting at Madison Square Garden over his deflowering of a teenage chorus girl. The anarchist bombing of Wall Street in 1920, which killed 39 people and injured hundreds more with flying shrapnel. Kitty Genovese's 1964 senseless stabbing, famously witnessed by dozen of bystanders who did not intervene. Robert Chambers, the handsome, wealthy ex-Choate student, who murdered Jennifer Levin in Central Park, called "The Preppy Murder Case."Son of Sam, a serial killer who eluded police for months while terrorizing the city, was finally apprehended through a simple parking ticket.Perfect for crime buffs, urban historians, and fans of American Crime Story, this riveting collection details New York's most startling and unsettling crimes, some known and unknown, through behind-the-scenes analysis of investigations and more than 250 revealing photographs.

Book Reviews - Case Files of the NYPD by Robert Mladinich

» Have you read this book? We'd like to know what you think about it - write a review about Case Files of the NYPD book by Robert Mladinich and you'll earn 50c in Boomerang Bucks loyalty dollars (you must be a Boomerang Books Account Holder - it's free to sign up and there are great benefits!)

Bernard J. Whalen is a lieutenant in the NYPD, where he has served for more than 34 years. He has published two books, The NYPD's First Fifty Years and the novel Justifiable Homicide. Philip Messing has been a crime reporter for the New York Post for more than 40 years. Robert Mladinich is a retired NYPD detective, who has named Cop of the Year in 1985. He as written a number of true crime books, including From the Mouth of the Monster: The Joel Rifkin Story, as well as articles for magazines including Playboy and Details. He is also the writer/editor for Frontline, a publication of the NYC Sergeants Benevolent Association.

A Preview for this title is currently not available.
More Books By Robert Mladinich
View All