Britain, Germany and the Winning of The Great War at Sea

In August 1914 the two greatest navies in the world confronted each other across the North Sea. At first there were skirmishes, then battles off the coasts of England and Germany and in the far corners of the world, including the Falklands. The British attempted to force the Dardanelles with battleships - which led to the Gallipoli catastrophe. As the stalemate on the ground on the Western Front continued, the German Navy released a last strike against the British 'ring of steel'. The result was Jutland, a titanic and brutal battle between dreadnoughts. The knowledge, understanding and literary power Robert K. Massie brings to this story is unparalleled. There will never again be a war like this in which seagoing monsters hurl shells at each other until one side is destroyed. The story is driven by some of the most dramatically intriguing personalities in history- Churchill and Jacky Fisher, Jellicoe and Beatty. And then there were the powerful Germans - von Pohl, Scheer, Hipper, and the grand old fork-bearded genius Tirpitz. Castles of Steel is a book about leadership and command, bravery and timidity, genius and folly, qualities which are of course displayed magnificently by Robert K. Massie's literary mastery.

Other Editions - Castles Of Steel by Robert K Massie 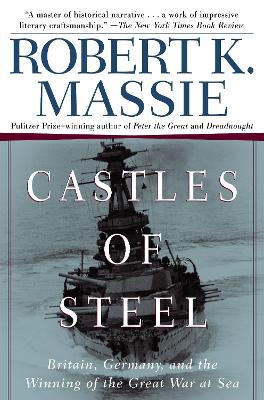 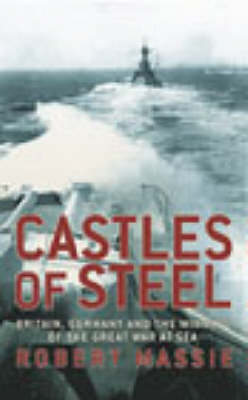 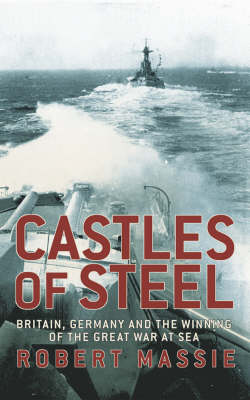 » Have you read this book? We'd like to know what you think about it - write a review about Castles Of Steel book by Robert K Massie and you'll earn 50c in Boomerang Bucks loyalty dollars (you must be a Boomerang Books Account Holder - it's free to sign up and there are great benefits!)

Robert Massie is a Pulitzer Prize winning author of biographies and naval history. Castles of Steel follows his earlier work Dreadnought: Britain, Germany, and the Coming of the Great War, as an equally fascinating account of the naval war at sea between 1914 and 1918. Castles of Steel combines a generally chronological narrative with character sketches of many of the principal actors and personal descriptions of significant events. It is this approach which makes the book stand apart from the very many others that cover some, or all, of the naval aspects of World War I.

At 865 pages, the book is a substantial volume. But it is an easy and sometimes compelling read. The narrative flows very well and is certainly enhanced by the frequent personal accounts of battles – whether at sea or within the British and German war Cabinets.

The bibliography is extensive and contains many biographical and autobiographical works from both sides of the conflict. The author’s approach to footnoting is somewhat unusual and perhaps unique. There are no footnotes as such; merely abbreviated quotes from the text, listed by chapter and page number at the end of the book, with brief descriptions of the source document and page number. Most readers will not be concerned by this, but those wanting to read more deeply will find it annoying.

Castles of Steel describes the significant aspects of the naval war between Britain and Germany, but with most emphasis on the British perspective. It begins in the Mediterranean, with the chase and escape of the Goeben in August 1914, and concludes with the ignominious end of the German High Seas Fleet; first with the mutinies at the end of hostilities, and then with the scuttling of the ships in Scapa Flow in June 1919.

In between, there are detailed accounts of operations by both navies in the North Sea, including the German raids on the East coast of England, the blockade of Germany and submarine operations by both sides. Specific attention is paid to the German deliberations, and American and British responses, to what became the unrestricted submarine warfare campaign.

Throughout the book there are also chapters devoted to the individuals who played major roles in the naval war and their relationships. So, on the German side most attention is paid to Kaiser William II, Admiral Tirpitz and Chancellor Bethmann-Hollweg, together with Admirals Scheer and Hipper. Possibly the most interesting descriptions relate to the German submarine campaign, considerations of likely British and American responses to it, and eventual German expressions of disregard. These descriptions include good coverage of the international legal issues at play and the political judgments made by the leaders of each country. Readers will feel sympathy for Bethmann-Hollweg and his attempts to dissuade William, who eventually found his military advisers more persuasive.

On the British side, most attention is paid to Admirals Jellicoe, Beatty and Fisher, as well as Winston Churchill in his time as First Lord of the Admiralty. The relationship between Fisher (as First Sea Lord) and Churchill, initially very warm but destined for destruction, is very well described. Massie’s contrasting characterisations of Jellicoe and Beatty are noteworthy. He is harsher on Beatty and his admittedly interesting personal life. He is if anything, a little too understanding of Jellicoe’s defensiveness, unwillingness to delegate and sometimes excessive loyalty to underperforming subordinates.

A significant portion of the book is devoted to three campaigns; Coronel and the Falklands, the Dardanelles and of course Jutland, with each being given five chapters. The treatment of each is comprehensive, although Australian readers may be disappointed by the offhand description of the sinking of the Emden. Nevertheless, each of these campaigns and the political and strategic issues accompanying them is described masterfully.

As an example, the descriptions of Admiral Sturdee, his relationship with Fisher and his appointment to lead the hunt for Spee in the South Atlantic are both vivid and revealing. Furthermore, his account of the battle of the Falklands and of the destruction and sinking of the Scharnhorst is genuinely stirring, yet at the same time sobering. Similarly, Massie explains well the genesis of the Dardanelles campaign and the lack of resolution that accompanied its planning and conduct. Finally, he identifies all of the now well known and analysed aspects of Jutland, evoking in this reader at least, a sense of frustration at the many missed Royal Navy opportunities on the night of that battle.

As might be expected in such a wide-ranging work, several themes run through Castles of Steel. Of these, two in particular are noteworthy. The first is the extent to which Britain, and the Royal Navy especially, were let down by poor communications – in the widest sense of that word. At the national level, political direction was sometimes unclear, or at least ambiguously transmitted. The instructions to Troubridge in the operation against the Goeben and the differences among the Army, the Navy and the Cabinet over the Dardanelles campaign highlight this.

Operationally, the situation was often much worse. Massie identifies any number of occasions on which poor tactical communications cost Britain dearly. Beatty’s failure to keep Evan-Thomas’s battle squadron informed of his intentions and to keep Jellicoe and the Grand Fleet informed of the enemy’s position during the afternoon of Jutland, are probably the most significant examples, but regrettably, there are others. These failings were sometimes the result of inadequate technology, as in the inability to get messages to Cradock off South America, and sometimes the result of human failings, as in the case of the hapless Lieutenant Commander Seymour (Beatty’s Flag Lieutenant) at Jutland and on other occasions.

Robert Massie is the Pulitzer Prize-winning author of Peter the Great, Nicholas and Alexandra, Dreadnought and The Romanovs- The Final Chapter. He lives in Irvington, New York.

A Preview for this title is currently not available.
More Books By Robert K Massie
View All