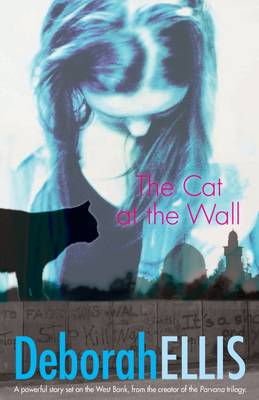 The Cat at the Wall

Description - The Cat at the Wall by Deborah Ellis

On Israel's West Bank, a cat sneaks into a small Palestinian house that has just been commandeered by two Israeli soldiers. The house seems empty, until the cat realises that a little boy is hiding beneath the floorboards.

Should she help him?

After all, she's just a cat.

It turns out that this particular cat is not used to thinking about anyone but herself. She was once a regular North American girl who only had to deal with normal middle-school problems - staying under the teachers' radar, bullying her sister and the uncool kids, outsmarting her clueless parents. But that was before she died and came back to life as a cat, in a place with a whole different set of rules for survival.

When the little boy is discovered, the soldiers don't know what to do with him. Where are the child's parents? Why has he been left alone in the house? It is not long before his teacher and classmates come looking for him, and the house is suddenly surrounded by Palestinian villagers throwing rocks, and the sound of Israeli tanks approaching. Not my business, thinks the cat. Then she sees a photograph, and suddenly understands what happened to the boy's parents, and why they have not returned. As the soldiers begin to panic, disaster seems certain, and she knows that it is up to her to defuse the situation. But what can a cat do? What can any one creature do?

Buy The Cat at the Wall by Deborah Ellis from Australia's Online Independent Bookstore, Boomerang Books.


Book Reviews - The Cat at the Wall by Deborah Ellis

» Have you read this book? We'd like to know what you think about it - write a review about Cat at the Wall book by Deborah Ellis and you'll earn 50c in Boomerang Bucks loyalty dollars (you must be a Boomerang Books Account Holder - it's free to sign up and there are great benefits!)

Deborah Ellis has achieved international acclaim with her courageous and dramatic books that give Western readers a glimpse into the plight of children in developing countries. She has won the Governor General's Award, Sweden's Peter Pan Prize, the Ruth Schwartz Award, the University of California's Middle East Book Award, the Jane Addams Children's Book Award and the Vicky Metcalf Award. A long-time feminist and anti-war activist, she is best known for the Parvana trilogy, which has been published around the world in seventeen languages, with more than a million dollars in royalties donated to Street Kids International and to Women for Women, an organization that supports health and education projects in Afghanistan. In 2006, Deb was named to the Order of Ontario.