Explosive, subversive, wild and funny, 50 years on the novel's strength is undiminished. Reading Joseph Heller's classic satire is nothing less than a rite of passage. Set in the closing months of World War II in an American bomber squadron off the coast of Italy, Catch-22 is the story of a bombardier named Yossarian who is frantic and furious because thousands of people he has never even met keep trying to kill him. Joseph Heller's bestselling novel is a hilarious and tragic satire on military madness, and the tale of one man's efforts to survive it. 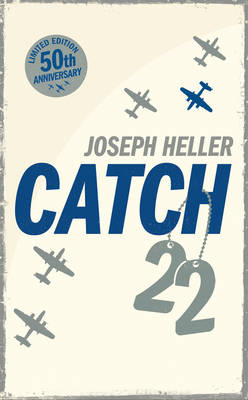 50 years after it was first written Joseph Heller's Catch-22 is still the definitve word on the madness of war. Hilarious, unforgettable and tragic.

» Have you read this book? We'd like to know what you think about it - write a review about Catch-22: 50th Anniversary Edition book by Joseph Heller and you'll earn 50c in Boomerang Bucks loyalty dollars (you must be a Boomerang Books Account Holder - it's free to sign up and there are great benefits!)

This cult classic, first released in 1961, has been re-released to engage a new generation.

Captain Yossarian is stationed in the Mediterranean during WWII as part of a US bomber crew and becomes convinced - often hilariously so - that the military is trying to 'send him to an untimely death'. This irony is just one of many in this frenetic, funny and insightful novel.

So far removed from the traditional take on war, patriotism, loyalty and duty, 'Catch-22' instead looks at such conflict as a 'form of institutional insanity' and explores the psychological, emotional and sociological toll on its participants.

It is by turns bizarre, comic and powerful and deserves its place in those books that are worthy of a re-issue.

Joseph Heller was born in Brooklyn, New York, in 1923. In 1961, he published Catch-22, which became a bestseller and, in 1970, a film. He went on to write such novels as Something Happened, God Knows, Picture This, Closing Time (the sequel to Catch-22), and Portrait of an Artist, as an Old Man. Heller died in December 1999.

Love in the Time of Cholera
Gabriel Garcia Marquez
$16.79 $19.99
More Books By Joseph Heller
View All