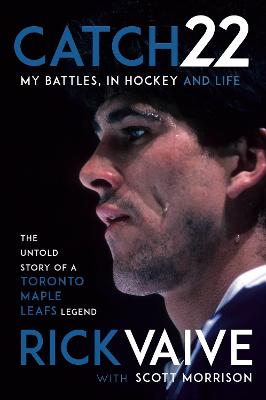 Catch 22: My Battles, in Hockey and Life

Description - Catch 22: My Battles, in Hockey and Life by Rick Vaive

In the storied history of the Toronto Maple Leafs, no player scored fifty goals in a season until Rick Vaive in 1981-82. He did it three years in a row (only two others have scored 50 since) before being unceremoniously stripped of his captaincy and traded out of town, and he did it for a promising team that was nonetheless largely stuck at the bottom of the standings. So why isn't his number 22 hanging from the rafters of the Leafs' rink and his name as revered in Leafs lore as Gilmour, Sundin and Clark?

You could blame it on a team that lost far more than it won. You could blame Harold Ballard and his erratic ownership. You could blame the fans, the media...Rick Vaive doesn't blame anybody. Sometimes, life just doesn't go your way. He'd know. Growing up in a household plagued by alcoholism, the gifted young hockey player took shelter in the company of his grandmother and a blind and severely disabled uncle. Rick learned quickly that there are more valuable things in life than hockey. Even after his promising coaching career stopped dead when it ran into Don Cherry in Mississauga--one of the worst seasons in Ontario junior hockey history--he still doesn't point fingers. Life is too sweet for regrets, but learning that lesson can be one hell of a ride.

Book Reviews - Catch 22: My Battles, in Hockey and Life by Rick Vaive

» Have you read this book? We'd like to know what you think about it - write a review about Catch 22: My Battles, in Hockey and Life book by Rick Vaive and you'll earn 50c in Boomerang Bucks loyalty dollars (you must be a Boomerang Books Account Holder - it's free to sign up and there are great benefits!)