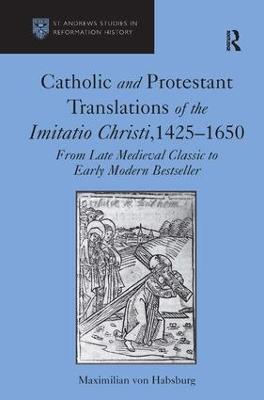 Catholic and Protestant Translations of the Imitatio Christi, 1425-1650

Description - Catholic and Protestant Translations of the Imitatio Christi, 1425-1650 by Maximilian von Habsburg

The Imitatio Christi is considered one of the classic texts of Western spirituality. There were 800 manuscript copies and more than 740 different printed editions of the Imitatio between its composition in the fifteenth century and 1650. During the Reformation period, the book retained its popularity with both Protestants and Catholics; with the exception of the Bible it was the most frequently printed book of the sixteenth century. In this pioneering study, the remarkable longevity of the Imitatio across geographical, chronological, linguistic and confessional boundaries is explored. Rather than attributing this enduring popularity to any particular quality of universality, this study suggests that its key virtue was its appropriation by different interest groups. That such an apparently Catholic and monastic work could be adopted and adapted by both Protestant reformers and Catholic activists (including the Jesuits) poses intriguing questions about our understanding of Reformation and Counter Reformation theology and confessional politics. This study focuses on the editions of the Imitatio printed in English, French, German and Latin between the 1470s and 1650. It offers an ambitious and comprehensive survey of the process of translation and its impact and contribution to religious culture. In so doing it offers a fresh analysis of spirituality and devotion within their proper late medieval and early modern contexts. It also demonstrates that spirituality was not a peripheral dimension of religion, but remains at the very heart of both Catholic and Protestant self-perception and identity.

» Have you read this book? We'd like to know what you think about it - write a review about Catholic and Protestant Translations of the Imitatio Christi, 1425-1650 book by Maximilian von Habsburg and you'll earn 50c in Boomerang Bucks loyalty dollars (you must be a Boomerang Books Account Holder - it's free to sign up and there are great benefits!)