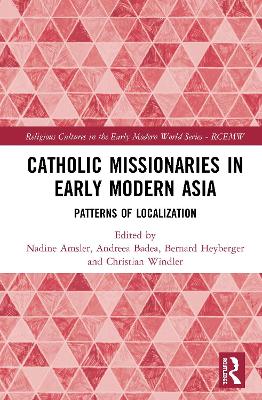 Over recent decades, historians have become increasingly interested in early modern Catholic missions in Asia as laboratories of cultural contact. This book builds on recent ground-breaking research on early modern Catholic missions, which has shown that missionaries in Asia cooperated with and accommodated the needs of local agents rather than being uncompromising promoters of post-Tridentine doctrine and devotion.

Bringing together some of the most renowned and innovative researchers from Anglophone countries and continental Europe, this volume investigates how missionaries' entanglements with local societies across Asia contributed to processes of localization within the early modern Catholic church. The focus of the volume is on missionaries' adaptation to four ideal-typical social settings that played an eminent role in early modern Asian missions: (1) the symbolically loaded princely court; (2) the city as a space of especially dense communication; (3) the countryside, where missionary presence was only rarely permanent; (4) and the household - a central arena of conversion in early modern Asian societies.

Shining a fresh light onto the history of early modern Catholic missions and the early modern Eurasian cultural exchange, this will be an important book for any scholar of religious history, history of cultural contact/global history and early modern history in Asia.

» Have you read this book? We'd like to know what you think about it - write a review about Catholic Missionaries in Early Modern Asia: Patterns of Localization book by Nadine Amsler and you'll earn 50c in Boomerang Bucks loyalty dollars (you must be a Boomerang Books Account Holder - it's free to sign up and there are great benefits!)


A Preview for this title is currently not available.
More Books By Nadine Amsler
View All