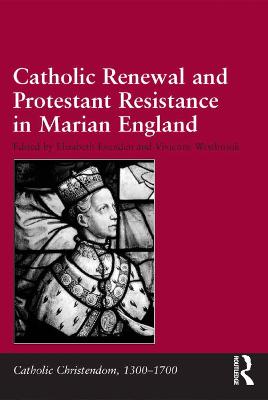 Mary Tudor's reign is regarded as a period where, within a short space of time, an early modern European state attempted to reverse the religious policy of preceding governments. This required the use of persuasion and coercion, of propaganda and censorship, as well as the controversial decision to revive an old statute against heresy. The efforts to renew Catholic worship and to revive Catholic education and spirituality were fiercely opposed by a small but determined group of Protestants, who sought ways of thwarting the return of Catholicism. The battle between those seeking to renew Catholicism and those determined to resist it raged for the full five years of Mary's reign.

This volume brings together eleven authors from different disciplines (English Literature, History, Divinity, and the History of the Book), who explore the different policies undertaken to ensure that Catholicism could flourish once more in England. The safety of the clergy and of the public at the Mass was of paramount importance, since sporadic unrest took place early on. Steps were taken to ensure that reformist worship was stopped and that the country re-embraced Catholic practices. This involved a number of short- and long-term plans to be enacted by the regime. These included purging the universities of reformist ideas and ensuring the (re)education of both the laity and the clergy. On a wider scale this was undertaken via the pulpit and the printing press. Those who opposed the return to Catholicism did so by various means. Some retreated into exile, while others chose the press to voice their objections, as this volume details. The regime's responses to the actions of individuals and to the clandestine texts produced by their opposition come under scrutiny throughout this volume.

The work presented here also offers new insight into the role of King Philip and his Spanish advisers. These essays therefore present a detailed assessment of the role of the Spanish who came with to England as a result of the marriage of Philip and Mary. They also move away from the ongoing discussions of 'persecution' seeking, rather, to present a more nuanced understanding of the regime's attempts to renew and revive a nation of worshippers, and to eradicate the disease of heresy. They also look at the ways those attempts were opposed by individuals at home and abroad, thereby providing a broad-ranging but detailed assessment of both Catholic renewal and Protestant resistance during the years 1553-1558.

» Have you read this book? We'd like to know what you think about it - write a review about Catholic Renewal and Protestant Resistance in Marian England book by Vivienne Westbrook and you'll earn 50c in Boomerang Bucks loyalty dollars (you must be a Boomerang Books Account Holder - it's free to sign up and there are great benefits!)

Elizabeth Evenden is a MarieSklodowska-Curie International Outgoing Fellow based in the History Department at Harvard University. She teaches Book History, Shakespeare, and Christo-Islamic Literature at Brunel University in London. Her publications include, Patents, Pictures and Patronage: John Day and the Tudor Book Trade and Religion and the Book: the Making of John Foxe's 'Book of Martyrs' with Thomas S. Freeman. She is currently undertaking research for a new project on Anglo-Portuguese relations and anti-Spanish propaganda. Vivienne Westbrook is an Associate Professor of English at National Taiwan University. She is Associate Editor for the journal Reformation, and has published widely on early modern religious literature, including Long Travail and Great Paynes: A Politics of Reformation Revision.

A Preview for this title is currently not available.
More Books By Vivienne Westbrook
View All