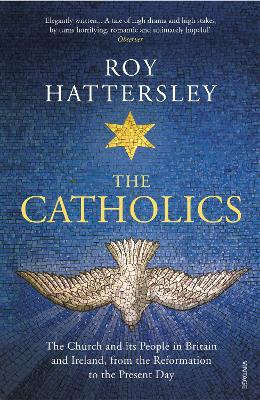 The Church and its People in Britain and Ireland, from the Reformation to the Present Day

Description - The Catholics by Roy Hattersley

The story of Catholicism in Britain from the Reformation to the present day, from a master of popular history - 'A first-class storyteller' The Times

The story of Catholicism in Britain from the Reformation to the present day, from a master of popular history - 'A first-class storyteller' The Times

Throughout the three hundred years that followed the Act of Supremacy - which, by making Henry VIII head of the Church, confirmed in law the breach with Rome - English Catholics were prosecuted, persecuted and penalised for the public expression of their faith. Even after the passing of the emancipation acts Catholics were still the victims of institutionalised discrimination.

The first book to tell the story of the Catholics in Britain in a single volume, The Catholics includes much previously unpublished information. It focuses on the lives, and sometimes deaths, of individual Catholics - martyrs and apostates, priests and laymen, converts and recusants. It tells the story of the men and women who faced the dangers and difficulties of being what their enemies still call 'Papists'. It describes the laws which circumscribed their lives, the political tensions which influenced their position within an essentially Anglican nation and the changes in dogma and liturgy by which Rome increasingly alienated their Protestant neighbours - and sometime even tested the loyalty of faithful Catholics.

The survival of Catholicism in Britain is the triumph of more than simple faith. It is the victory of moral and spiritual unbending certainty. Catholicism survives because it does not compromise. It is a characteristic that excites admiration in even a hardened atheist.

Other Editions - The Catholics by Roy Hattersley » Have you read this book? We'd like to know what you think about it - write a review about Catholics book by Roy Hattersley and you'll earn 50c in Boomerang Bucks loyalty dollars (you must be a Boomerang Books Account Holder - it's free to sign up and there are great benefits!)

Roy Hattersley was elected to Parliament in 1964. He served in Harold Wilson's government and in Jim Callaghan's Cabinet. In 1983 he became deputy leader of the Labour Party. As well as contributing to a host of national newspapers, he has written twenty-five books, including The Edwardians; Borrowed Time- the Story of Britain between the Wars; In Search of England; acclaimed biographies of John Wesley and Lloyd George, and, most recently, The Devonshires. Roy Hattersley has been Visiting Fellow of Harvard's Institute of Politics and of Nuffield College, Oxford. In 2003 he was elected a Fellow of the Royal Society of Literature.

A Preview for this title is currently not available.
More Books By Roy Hattersley
View All