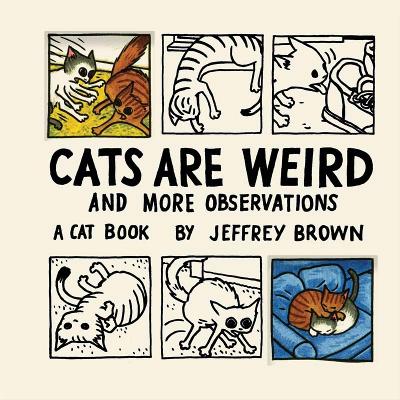 Cartoonist Jeffrey Brown's drawings perfectly capture the humor and quirkiness of cats in all their strange and charming glory. Following the success of Cat Getting Out of a Bag, this all-new collection of color and black-and-white comic strips loosely follows the adventures of a pair of cats as they explore the world around them, indoors and out. Adventures include taking a nap, licking a shoe, attacking dust particles, hiding in cabinets, pouncing on fallen leaves, confronting the vacuum cleaner, patrolling the yard, and purring up a stormall adorably rendered in Brown's immediate and irresistible style. Sure to delight anyone who lives with cats and appreciatestheir sweet and batty behavior, this beautifully packaged gift book is the cat's meow.

» Have you read this book? We'd like to know what you think about it - write a review about Cats Are Weird book by Jeffrey Brown and you'll earn 50c in Boomerang Bucks loyalty dollars (you must be a Boomerang Books Account Holder - it's free to sign up and there are great benefits!)

Jeffrey Brown has written and illustrated numerous graphic novels and comics. His work has been featured in McSweeney's and The Best American Comics series, and on NPR's This American Life. He lives in Chicago. PUBLISHED WORKS WITH TOP SHELF Clumsy(2002)now in its 4th printing Unlikely(2003)now in its 2nd printing Be A Man(2004)now in its 2nd printing Bighead(2004) MiniatureSulk(2005) AEIOU(2005) Conversation#2(with James Kochalka, 2005) Every Girl Is The End Of The World For Me (2006) PUBLISHED WITH S&S I Am Going To Be Small (2008) Funny Mishapen Body (2009) FOREIGN TRANSLATIONS: Cat Getting Out of a Bag has been translated into Spanish and Korean. Clumsy and Bighead are available in French; Unlikely, AEIOU and Every Girl are under contract to also be published in French; Clumsy and Unlikely are under contract to be published in Spanish.

A Preview for this title is currently not available.
More Books By Jeffrey Brown
View All