In Causes of Delinquency, Hirschi attempts to state and test a theory of delinquency, seeing in the delinquent a person relatively free of the intimate attachments, the aspirations, and the moral beliefs that bind most people to a life within the law. In prominent alternative theories, the delinquent appears either as a frustrated striver forced into delinquency by his acceptance of the goals common to us all, or as an innocent foreigner attempting to obey the rules of a society that is not in position to make the law or define conduct as good or evil. Hirschi analyzes a large body of data on delinquency collected in Western Contra Costa County, California, contrasting throughout the assumptions of the strain, control, and cultural deviance theories. He outlines the assumptions of these theories and discusses the logical and empirical difficulties attributed to each of them. Then draws from sources an outline of social control theory, the theory that informs the subsequent analysis and which is advocated here.

Often listed as a "Citation Classic," Causes of Delinquency retains its force and cogency with age. It is an important volume and a necessary addition to the libraries of sociologists, criminologists, scholars and students in the area of delinquency.

Other Editions - Causes of Delinquency by Travis Hirschi 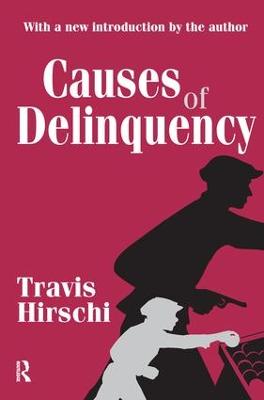 » Have you read this book? We'd like to know what you think about it - write a review about Causes of Delinquency book by Travis Hirschi and you'll earn 50c in Boomerang Bucks loyalty dollars (you must be a Boomerang Books Account Holder - it's free to sign up and there are great benefits!)


A Preview for this title is currently not available.
More Books By Travis Hirschi
View All