'This is a masterful novel...readers who lovedGoodwood will find even more to love here.' Books + Publishing on Cedar Valley

'So much truth, so much aching and pain by humour. What a wonderful book. I can see the Australian novelist continuum from Patrick White and Thea Astley in her explicit representation of the character of Australians in regional towns. Others have compared Throsby with Tim Winton. I hope she is writing another book.' Lindy Morrison in LoudMouth on Goodwood
'Stunning...a distinctly Australian coming-of-age story...balancing carefully evoked dread with genuine warmth, it's an assured and singular debut.' The Big Issue on Goodwood

'He strolled down Valley Road, only briefly, past the hairdresser and a small cafe. A warm wind stirred, carrying with it the faint smell of pies and horses, and the man paused for just a moment before he sat down. Benny Miller would have driven right past him in her station wagon on that bright and brimming day.'

On the first day of summer in 1993, two strangers arrive in the town of Cedar Valley.

One is a calm looking man in a brown suit. He makes his way down the main street and walks directly to Cedar Valley Curios & Old Wares, sitting down on the footpath, where he leans silently against the big glass window for hours.

The other is 21-year-old Benny Miller. Fresh out of university, Benny has come to Cedar Valley in search of information about her mother, Vivian, who has recently died. Vivian's mysterious old friend, Odette Fisher, has offered Benny her modest pale green cottage for as long as she wants it.

Is there any connection between the man on the pavement and Benny's quest to learn more about her mother? Holly Throsby is the perfect guide as Cedar Valley and its inhabitants slowly reveal their secrets.
Praise for Goodwood:

'The kind of big-hearted, emotionally bruising story that reminds you why you love fiction... Goodwood is many things: a satisfying and conscientiously constructed mystery, an affectionate but clear-eyed portrait of a time and a place, and a darkly lovely coming of age story. But most of all, it's a complete revelation, the conjuring up of a sad, beautiful, indelible little world of its own' - The Sydney Morning Herald

'It has been a while since I lost a weekend to a debut novel... There is so much to enjoy about this book; my tip is that it will become a firm book club favourite. Five stars!' - Good Reading Magazine 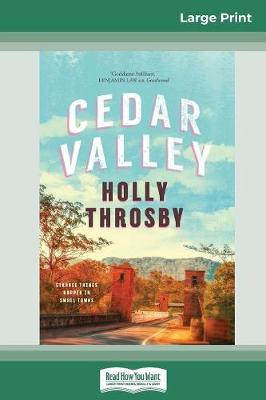 » Have you read this book? We'd like to know what you think about it - write a review about Cedar Valley book by Holly Throsby and you'll earn 50c in Boomerang Bucks loyalty dollars (you must be a Boomerang Books Account Holder - it's free to sign up and there are great benefits!)

5 stars Cedar Valley is the second novel by Australian songwriter, musician and novelist , Holly Throsby. It's the first day of December, 1993, a Wednesday, when twenty-one-year-old Benny Miller drives to Cedar Valley in the hope of learning more about her mother. An enigmatic woman, Vivian Moon was not much of a mother: she virtually abandoned her daughter at five months into the care of Benny’s vaguely competent father, Frank Miller, visiting only sporadically, and not for years before her recent death. At the invitation of her mother's best friend, Benny is staying in Odette Fisher's vacant cottage in Cedar Valley.

Once settled in, Benny ventures down Valley Road into a crowd of people gathered on the footpath outside Cedar Valley Curios and Old Wares. There on the pavement sits a neatly dressed man, dead. Who he is, how he died and why right here in Cedar Valley, are all mysteries. But before any details are known, some people are already remarking on the uncanny similarity to that famous unsolved case, Adelaide's Somerton Man.

Detective Sergeant Anthony Simmons has his constables on the job: photos, fingerprints, a post mortem by the strangely fascinating Dr Ping Williams, routine enquiries of witnesses and, when all that fails to identify the mystery man, a sketch artist for the public appeal for information. Clues come from unexpected sources: even Tony’s elderly mother, Elsie provides useful input.

Meanwhile, Benny visits Odette in her hillside house and the two gradually discover the woman that Vivian was. There are surprises in that for both of them, and some of what they learn is disturbing. Of course they also discuss the dead man: it’s naturally the talk of the whole town, and everyone has a theory.

What a marvellous tale Throsby gives the reader! An intriguing plot with several twists and a few red herrings to keep the pages turning until the final “aha” moment. All this in a setting so well rendered that, along with the cover picture, readers familiar with the area are sure to have a certain town fixed in their minds. But it could be any NSW small town with its attractive and its less desirable qualities, and that includes the residents.

While some are necessarily a little stereotypical and therefore one-dimensional (the obligatory sleazebag, his eternally complaining wife, the overweight cop), the townspeople are, of course, what makes this novel. If they are all are believably flawed, many are also kind and generous and wise (of that wife, Elsie Simmons says that some people connect to the world through their complaints about it). Even the busybody has unexpected depth. It soon becomes apparent why they love their town.

Throsby’s second novel is clever and captivating and heart-warming. There’s plenty of (sometimes very black) humour and more than one mystery to be solved. Readers unfamiliar with the work of this talented author are likely to seek out her debut novel, Goodwood. A brilliant read.