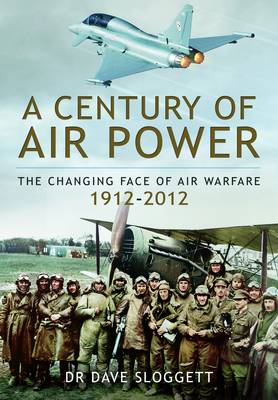 A Century of Air Power

Description - A Century of Air Power by Dave Sloggett

No other technical development since the introduction of gunpowder has had as great an influence on warfare as the aircraft. From its early beginnings as simply a means of aerial reconnaissance to its utter supremacy on the battlefield, the aircraft has evolved into the most versatile and precise killing machine known to man. In this wide-ranging and comprehensive study, David Sloggett, an internationally-respected defence analyst, investigates the changing role and increasing significance of air power over the course of the previous 100 years. This is accomplished by detailing every major conflict during that period including not only the two world wars and the recent conflicts in the Middle East but also the Korean War, the Cuban Missile Crisis, the Falklands War and Russian use of air power in Afghanistan. Air power's role in Malaya, Oman, Kenya and in Northern Ireland is also explained. "A Century of Air Warfare" is the most important study of the use of military aircraft ever undertaken and as such provides valuable lessons for the future not only for the commanders who have to apply these all-powerful weapons but also for the politicians who have to determine its use. SELLING POINTS: Published on the 100 anniversary of the first use of Air-Power RAF endorsed Covers new topics and insights concerning Air Power that are not in the public domain 30 images

Book Reviews - A Century of Air Power by Dave Sloggett

» Have you read this book? We'd like to know what you think about it - write a review about Century of Air Power book by Dave Sloggett and you'll earn 50c in Boomerang Bucks loyalty dollars (you must be a Boomerang Books Account Holder - it's free to sign up and there are great benefits!)

Dr Dave Sloggett has spent over 40 years working with the United Kingdom military forces as a scientific advisor and analyst. His work has led him to visit Northern Ireland, Kosovo, Iraq and Afghanistan on numerous occasions. He is a recognised authority on Counter Insurgency (COIN) operations and is used as an advisor by NATO to lecture on this subject in support of training missions seeking to help countries establish their own military forces. Today he writes for a wide range of publications and is a strategic advisor to IHS-Janes the publishing company, an organisation for which he is also a regular contributor to their on-line webinars and their publications, such as Janes Intelligence Review, Janes Defence Weekly, Janes Navy International and Janes Islamic Affairs Analysis.

A Preview for this title is currently not available.
More Books By Dave Sloggett
View All