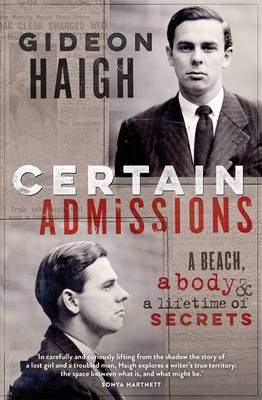 Certain Admissions: A Beach, A Body And A Lifetime Of Secrets

Description - Certain Admissions: A Beach, A Body And A Lifetime Of Secrets by Gideon Haigh

Certain Admissions is stranger than any crime fiction. It is real-life police procedural, courtroom drama, family saga, investigative journalism, social history, archival treasure hunt - a meditation, too, on how the past shapes the present, and the present the past.

Certain Admissions is Australian true crime at its best, and stranger than any crime fiction. It is real-life police procedural, courtroom drama, family saga, investigative journalism, social history, archival treasure hunt - a meditation, too, on how the past shapes the present, and the present the past.

On a warm evening in December 1949, two young people met by chance under the clocks at Flinders Street railway station. They decided to have a night on the town. The next morning, one of them, twenty-year-old typist Beth Williams, was found dead on Albert Park Beach. When police arrested the other, Australia was transfixed- twenty-four-year-old John Bryan Kerr was a son of the establishment, a suave and handsome commercial radio star educated at Scotch College, and Harold Holt's next-door neighbour in Toorak.

Police said he had confessed. Kerr denied it steadfastly. There were three dramatic trials attended by enormous crowds, a relentless public campaign proclaiming his innocence involving the first editorials against capital punishment in Australia. For more than a decade Kerr was a Pentridge celebrity, a poster boy for rehabilitation - a fame that burdened him the rest of his life. Then, shortly after his death, another man confessed to having murdered Williams. But could he be believed?

'A work of true detection that not only compels belief in its every detail but has the breathtaking suspense of that very weird and rare for of crime writing that has the truth of a work of art.' Weekend Australian

'Haigh's work is a mesmerising detective story itself . . . it finds a new twist in the archives.' The Saturday Paper

'The trial of John Bryan Kerr was the first murder trial that I read about in detail, as a boy of eleven. I longed, even then, to know the whole story. Gideon Haigh's book has made the wait worthwhile.' Gerald Murnane

'In carefully and curiously lifting from the shadow the story of a lost girl and a troubled man, Haigh explores a writer's true territory- the space between what is, and what might be.' Sonya Hartnett

Buy Certain Admissions: A Beach, A Body And A Lifetime Of Secrets by Gideon Haigh from Australia's Online Independent Bookstore, Boomerang Books.

Other Editions - Certain Admissions: A Beach, A Body And A Lifetime Of Secrets by Gideon Haigh 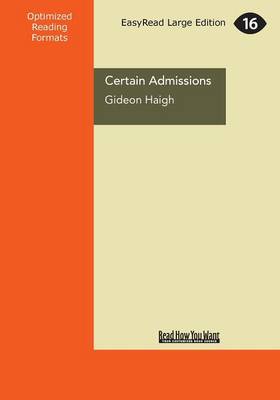 Book Reviews - Certain Admissions: A Beach, A Body And A Lifetime Of Secrets by Gideon Haigh

» Have you read this book? We'd like to know what you think about it - write a review about Certain Admissions: A Beach, A Body And A Lifetime Of Secrets book by Gideon Haigh and you'll earn 50c in Boomerang Bucks loyalty dollars (you must be a Boomerang Books Account Holder - it's free to sign up and there are great benefits!)

Gideon Haigh has been a journalist for more than thirty years, contributed to more than a hundred newspapers and magazines, written thirty books and edited seven others. His book On Warne won the British Sports Book Awards Best Cricket Book of the Year Award, the Cricket Society and MCC Book of the Year Award, the Jack Pollard Trophy, and the Waverley Library Nib Award; it was also shortlisted for the Australian Book Industry Awards Biography of the Year, the Victorian Premier's Literary Awards, and the Adelaide Festival Awards for Literature. The Office won the NSW Premier's Literary Awards Douglas Stewart Prize for Non-fiction. Other recent titles include Uncertain Corridors- Writings on Modern Cricket, End of the Road? on Australia's automotive industry, and The Deserted Newsroom, about media in a digital age.