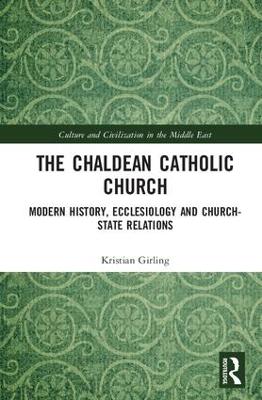 This book provides a modern historical study of the Chaldean Catholic Church in Iraq from 2003 to 2013, against a background analysis of the origins and ecclesiological development of the Chaldean community from the sixteenth century onwards.

The book offers an insight into the formation of Chaldean ecclesiological identity and organisation in the context of the Chaldeans as a community originating from the ecclesial traditions of the Church of the East and as an Eastern Catholic Church in union with the Holy See. The book argues for the gradual and consistent development of a Chaldean identity grounded and incarnated in the Mesopotamian-Iraqi environment, yet open to engaging with cultures throughout the Middle East and West Asia and, especially since 2003, to Europe, North America and Australasia. It also examines the effects of religious and administrative policies of the governors of Mesopotamia-Iraq on the Chaldeans, from their formation in the sixteenth century until the installation of the new Chaldean patriarch, Louis Raphael I Sako, in March 2013. Furthermore, the book provides a unique analysis of the history of Iraq, by placing the Chaldeans fully into that narrative for the first time.

Providing a thorough overview of the history of the Chaldeans and an in-depth assessment of how the 2003 invasion has affected them, this book will be a key resource for students and scholars of Middle East Studies, Modern History, History of Christianity, as well as for anyone seeking to understand the modern status of Christians in Iraq and the wider Middle East.

Other Editions - The Chaldean Catholic Church by Kristian Girling » Have you read this book? We'd like to know what you think about it - write a review about Chaldean Catholic Church book by Kristian Girling and you'll earn 50c in Boomerang Bucks loyalty dollars (you must be a Boomerang Books Account Holder - it's free to sign up and there are great benefits!)

Kristian Girling is currently a freelance researcher and writer. He was a Visiting Fellow at Boston College's School of Theology and Ministry from 2016-2017. He completed his PhD at the Centre for Eastern Christianity, Heythrop College in 2016. Kristian's research focuses on the modern history of Eastern Christianity particularly in the Middle East.

A Preview for this title is currently not available.
More Books By Kristian Girling
View All