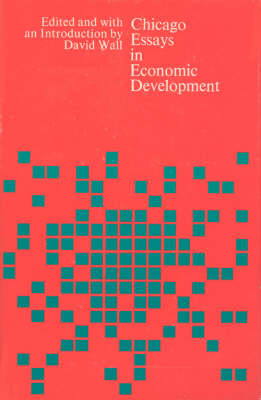 What happens when the methods of the Chicago school of economics are applied to development problems? By collecting fifteen prime examples for this volume, David Wall has shown that these methods go a long way toward the clarification and solution of the economic problems faced by the world's underdeveloped countries. The contributors, all members of the Department of Economics at the University of Chicago, are Theodore Schultz, Harry G. Johnson, Arnold C. Harberger, Bert F. Hoselitz, and Larry A. Sjaastad, and D. Gale Johnson.

These Chicago economists share a common intellectual framework universally recognized in the profession and derived from three beliefs: first, that theory is of fundamental importance; second, that theory is irrelevant unless set in a definite empirical context; and third, that in the absence of evidence to the contrary, the market works. Critics of the Chicago school tend to ignore the first two of these and to overlook the qualifying proviso of the third. This volume sets out to rectify that misunderstanding and to circulate more widely some of the best work produced by the Chicago school.

The essays in the opening "general" section clearly illustrate the characteristics of the Chicago school while also reflecting some well-known idiosyncrasies of four of its more prominent spokesmen. The other two sections, "Domestic Policy" and "Trade and Aid," cover topics on which Chicago authors have made a marked impact. Together, these essays will provide a basic reference book for students of the subject, illustrating one of the leading methods of analyzing economic development problems.

» Have you read this book? We'd like to know what you think about it - write a review about Chicago Essays in Economic Development book by David Wall and you'll earn 50c in Boomerang Bucks loyalty dollars (you must be a Boomerang Books Account Holder - it's free to sign up and there are great benefits!)


A Preview for this title is currently not available.
More Books By David Wall
View All

The Chief Constables of England and Wales: The Socio-legal History of a Criminal Justice Elite
$207.90 $231.00