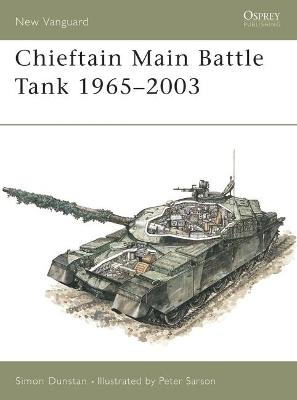 The concept of the Main Battle Tank emerged from the Centurion Universal tank that was developed at the end of World War II. Development of its successor began as early as 1951. The Chieftain incorporated significant innovations including a reclining driver position and two-piece ammunition for greater survivability. The tank entered service in 1967 and was the heaviest armed, armoured MBT within the NATO alliance. The Chieftain saw combat during the Iran/Iraq War, with the Kuwaitis during the 1990 Iraqi invasion and with the British Army during the Gulf War of 1990/91 as special-purpose variants. This book explores the design, development and operation of one of the most influential vehicles used in modern warfare.

» Have you read this book? We'd like to know what you think about it - write a review about Chieftain Main Battle Tank 1965-2003 book by Simon Dunstan and you'll earn 50c in Boomerang Bucks loyalty dollars (you must be a Boomerang Books Account Holder - it's free to sign up and there are great benefits!)

Simon Dunstan is a well-established author, film maker and photographer in the field of military history, with several titles already published with Osprey. He specialises on the subject of armoured warfare, a field on which he has been writing for two decades. His books have covered topics such as helicopter and armoured warfare in Vietnam, the Challenger main battle tank. The British Guards and armoured warfare in Korea. Simon lives and works in London. Peter Sarson has produced graphic cutaways for many armoured vehicle publications, and is regarded as one of the world's great illustrators of military vehicles. Peter lives and works in Dorset, UK.