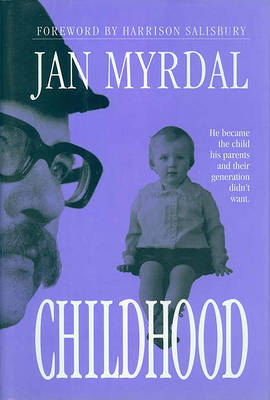 "Childhood" was a scandal which became a classic.This book's revisionist look at the private lives of the founders of the Swedish welfare state was so scandalous it was almost suppressed in Sweden. Sissela Bok's "Alva Myrdal" was written in response, to give Jan's mother's point of view on this fascinating, troubled family.But Childhood is first of all a story about the intense experience of childhood stripped of all sentimentality, seen again with a child's naive openness to all of its sensual wonder, fantasies, and anger.Jan Myrdal's novels about his childhood have already become classics in Sweden, where the most recent history of Swedish literature called them "one of our literature's most remarkable descriptions of how a self is created."Myrdal insists that this book is "a story about childhood, not an autobiography." And it is not necessary for the reader to know that the Alva in the book is the Alva Myrdal who won the Nobel Peace Prize and the Gunnar is the Gunnar Myrdal who wrote "An American Dilemma" and won the Nobel Prize for Economics.But it is part of the background of the book that the Myrdals as individuals, not as a family, have had a dominating intellectual influence in Sweden since the end of the 1920s.It is also part of the background of this book that it was a major scandal. "Childhood" takes you into the private life of Sweden's intellectual and political establishment, showing it to you through the eyes of a child unimpressed by its pretensions, a child who was to become "Jan Myrdal, the insolent, the intolerant, the merciless critic of Swedish social-democracy" (Le Monde).Although Myrdal was already a best-selling author in Sweden, he had to fight to get "Childhood" published, and it was almost marginalized in a small, limited edition. But he circumvented attempts to suppress the book by reading it on the radio and serializing it in a major daily, forcing the controversy into the open. "Childhood" soon became a best-seller and later was accepted as a classic.

» Have you read this book? We'd like to know what you think about it - write a review about Childhood book by Jan Myrdal and you'll earn 50c in Boomerang Bucks loyalty dollars (you must be a Boomerang Books Account Holder - it's free to sign up and there are great benefits!)


A Preview for this title is currently not available.
More Books By Jan Myrdal
View All