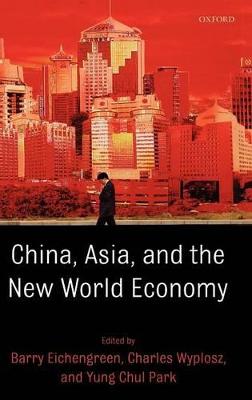 The rise of Asia, and China specifically, is the single most important force reshaping the world economy at the beginning of the 21st century. From a low of 20 per cent in 1950, Asia's share of global GDP has now risen to 33 per cent and will exceed 40 per cent within a generation if current forecasts are realized. Asia's growing weight in the world economy is elevating it to a central position in global economic and financial affairs. The potential global impact
of this astonishing growth is far reaching, from oil markets and the environment to a reshaping of trade relations in the current multilateral system dominated by the WTO.This
collection of original essays written by leading economists explores the likely impact of the rapid growth in the East Asian economies, and in particular China, on the world economy in the coming decades and the consequent challenges for the development of trade, macroeconomic, and environmental policy.

» Have you read this book? We'd like to know what you think about it - write a review about China, Asia, and the New World Economy book by Barry Eichengreen and you'll earn 50c in Boomerang Bucks loyalty dollars (you must be a Boomerang Books Account Holder - it's free to sign up and there are great benefits!)

Barry Eichengreen is George C. Pardee and Helen N. Pardee Professor of Economics and Political Science at the University of California, Berkeley, Research Associate of the NBER, and Research Fellow of the Centre for Economic Policy Research. Yung Chul Park is Research Professor, Graduate School of International Studies, Seoul National University. Charles Wyplosz, who teaches at the Graduate Institute of International Studies in Geneva, is working on international monetary issues, with particular interest in regional arrangements in Europe.