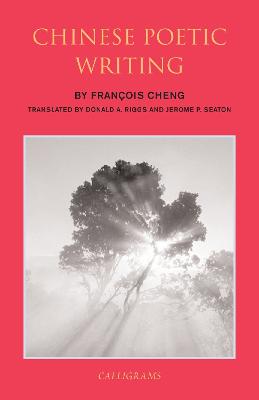 Since its first publication in French in 1977, Chinese Poetic Writing has been considered by many to be the most innovative study of Chinese poetry ever written, as well as a profound and remarkable meditation on the nature of poetry itself. As the American poet Gustaf Sobin wrote, two years after the book's appearance, "In France it is already considered a model of interdisciplinary research, a source book, and a 'star' in the very space it initially explored, traced, and elaborated."

Cheng illustrates his text with an annotated anthology of 135 poems he has selected from the Tang dynasty, presented bilingually, and with lively translations by Jerome P. Seaton. It serves as a book within the book, and an excellent introduction to the golden age of Tu Fu, Li Po, Wang Wei, and company.

The 1982 translation, long out of print, was based on the first French edition. Since then, Cheng has greatly expanded the book. This is the first English-language edition of the expanded version, with the original translators returning to accommodate the many new additions and revise their earlier work.

» Have you read this book? We'd like to know what you think about it - write a review about Chinese Poetic Writings book by Donald A. Riggs and you'll earn 50c in Boomerang Bucks loyalty dollars (you must be a Boomerang Books Account Holder - it's free to sign up and there are great benefits!)

Franpois Cheng is a poet, essayist, novelist, calligrapher, and art historian who has lived in Paris since 1949. Among his books available in English translation are Empty and Full- The Language of Chinese Painting, The Way of Beauty, and the novels The River Below and Green Mountain, White Cloud. In 2002, he became the first person of Asian origin elected to the French Academy. a Donald A. Riggs is Teaching Professor of English at Drexel University. He is currently writing entries for The Ashgate Encyclopedia of Literary and Cinematic Monsters. a Jerome P. Seaton is professor emeritus of Chinese at the University of North Carolina, Chapel Hill. Among his books are The Shambhala Anthology of Chinese Poetry and The Wine of Endless Life- Taoist Drinking Songs from the Yuan Dynasty.