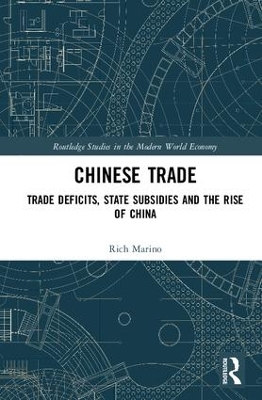 Trade Deficits, State Subsidies and The Rise of China

There's no question, compared to the advanced economies China's economic growth rates have been spectacular, but in most instances the economic analysts tend to forget that a large part of China's growth has been dictated by government industrial subsidies. How did China go from a bit player overnight to the largest exporter in the world in capital-intensive industries?

This book shows that government subsidies play a big part in China's success. Government subsidies include those to basic industries: energy (coal, electricity, natural gas and heavy oil), steel, glass, paper, auto parts, solar and more. A lot has been written about China's trade practices with the West, but none of this work addresses the real unsustainable dilemma. Much of the current literature discusses the problems but doesn't explain the root cause of China's lopsided trade practices with the West or explain in detail how China finances its government subsidies, with nothing written that explains that China's subsidized exports to the United States and European Union are basically self-funded by its enormous trade surplus with the West. A trade surplus represents a net inflow of domestic currency from foreign markets and is the opposite of a trade deficit, which would represent a net outflow. Moreover, this is the only book that describes China's current trade practices with the West as a zero sum game at the expense of the West.

This book provides two solutions to this endless quagmire: an increase in Western exports to China so that China and the West have more of an equal trade balance, or a very steep reduction of China's exports to the West.

» Have you read this book? We'd like to know what you think about it - write a review about Chinese Trade book by Rich Marino and you'll earn 50c in Boomerang Bucks loyalty dollars (you must be a Boomerang Books Account Holder - it's free to sign up and there are great benefits!)

Rich Marino is the former Senior Vice-President of Morgan Stanley. He is an established author on the BRICS countries.