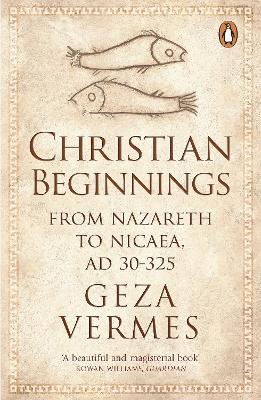 Geza Vermes, translator and editor of The Complete Dead Sea Scrolls and worldwide expert on the life and times of Jesus, tells the enthralling story of early Christianity and the origins of a religion.

The creation of the Christian Church is one of the most important stories in the development of the world's history, yet one of the least understood.
With a forensic, brilliant re-examination of all the key surviving texts of early Christianity, Geza Vermes illuminates the origins of a faith and traces the evolution of the figure of Jesus from the man he was - a prophet in the tradition of other Jewish holy men of the Old Testament - to what he came to represent- a mysterious, otherworldly being at the heart of the official state religion of the Roman Empire. Christian Beginnings pulls apart myths and misunderstandings to focus on the true figure of Jesus, and the birth of one of the world's major religions.
Reviews-
'A beautiful and magisterial book' Rowan Williams, Archbishop of Canterbury, Guardian

'An exciting and challenging port of call, sweeping aside much of the fuzzy thinking and special pleading that bedevils the study of sacred scripture ... courteously expressed and witty' Diarmaid MacCulloch, The Times
'A challenging and engaging book that sets out to retrace the route by which a Jewish preacher in 1st-century Israel came to be declared as consubstantial and co-equal with the omnipotent, omniscient only God' Stuart Kelly, Scotsman
'A major contribution to our understanding of the historical Jesus' Financial Times
'A very accessible and entertaining read' Scotland on Sunday Books of the Year
'A magnum opus of early Christian history and one of the year's most significant titles' Bookseller » Have you read this book? We'd like to know what you think about it - write a review about Christian Beginnings book by Geza Vermes and you'll earn 50c in Boomerang Bucks loyalty dollars (you must be a Boomerang Books Account Holder - it's free to sign up and there are great benefits!)

Geza Vermes was born in Hungary in 1924. He studied in Budapest and Louvain, and was the first Professor of Jewish Studies at Oxford. He is one of the world's greatest experts on early Christianity and the Dead Sea Scrolls.

A Preview for this title is currently not available.
More Books By Geza Vermes
View All