A major new introduction to the global history of Christianity,
written by one of the world?s leading theologians and author
of numerous bestselling textbooks.

Provides a truly global review by exploring the development of
Christianity and related issues in Asia, Latin America and Africa,
and not just focusing on Western concerns

Spanning more than two millennia and combining elements of
theology, history, and culture, it traces the development of all
three branches of Christianity ? Catholic, Protestant, and
Orthodox ? providing context to Christianity?s origins
and its links to Judaism

Looks beyond denominational history at Christianity?s
impact on individuals, society, politics, and intellectual thought,
as well as on art, architecture, and the natural sciences

Offers an accessible and student-oriented text, assuming little
or no advance theological or historical knowledge on the part of
the reader 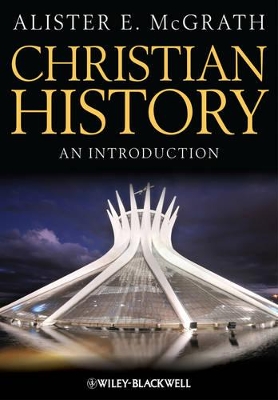 » Have you read this book? We'd like to know what you think about it - write a review about Christian History book by Alister E. McGrath and you'll earn 50c in Boomerang Bucks loyalty dollars (you must be a Boomerang Books Account Holder - it's free to sign up and there are great benefits!)

Alister E. McGrath is Professor of Theology, Ministry and Education at King?s College London, UK, and head of its Centre for Theology, Religion, and Culture. Prior to his current post, he was Professor of Historical Theology at Oxford University, UK. One of the world?s leading theologians, he is the author of some of the most widely used textbooks on theology, including the bestselling Christian Theology: An Introduction (Wiley-Blackwell, 2010), now in its fifth edition, and Historical Theology, second edition (Wiley-Blackwell, 2012). He is much in demand as a speaker at conferences around the world.

A Preview for this title is currently not available.
More Books By Alister E. McGrath
View All

A Theory of Everything (That Matters): A Short Guide to Einstein, Relativity and the Future of Faith
$27.71 $32.99