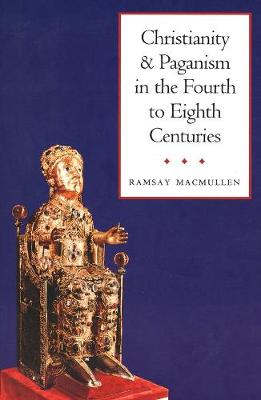 Christianity and Paganism in the Fourth to Eighth Centuries

The slaughter of animals for religious feasts, the tinkling of bells to ward off evil during holy rites, the custom of dancing in religious services?these and many other pagan practices persisted in the Christian church for hundreds of years after Constantine proclaimed Christianity the one official religion of Rome. In this book, Ramsay MacMullen investigates the transition from paganism to Christianity between the fourth and eighth centuries. He reassesses the triumph of Christianity, contending that it was neither tidy nor quick, and he shows that the two religious systems were both vital during an interactive period that lasted far longer than historians have previously believed.

MacMullen explores the influences of paganism and Christianity upon each other. In a rich discussion of the different strengths of the two systems, he demonstrates that pagan beliefs were not eclipsed or displaced by Christianity but persisted or were transformed. The victory of the Christian church, he explains, was one not of obliteration but of widening embrace and assimilation. This fascinating book also includes new material on the Christian persecution of pagans over the centuries through methods that ranged from fines to crucifixion; the mixture of motives in conversion; the stubbornness of pagan resistance; the difficulty of satisfying the demands and expectations of new converts; and the degree of assimilation of Christianity to paganism.

Buy Christianity and Paganism in the Fourth to Eighth Centuries by Ramsay MacMullen from Australia's Online Independent Bookstore, Boomerang Books.

» Have you read this book? We'd like to know what you think about it - write a review about Christianity and Paganism in the Fourth to Eighth Centuries book by Ramsay MacMullen and you'll earn 50c in Boomerang Bucks loyalty dollars (you must be a Boomerang Books Account Holder - it's free to sign up and there are great benefits!)