A product of electrifying scholarship conveyed with commanding skill, "Christianity" goes back to the origins of the Hebrew Bible and encompasses the globe. It captures the major turning points in human history and fills in often neglected accounts of conversion and confrontation in Africa, Latin America, and Asia.

Other Editions - Christianity by Diarmaid MacCulloch 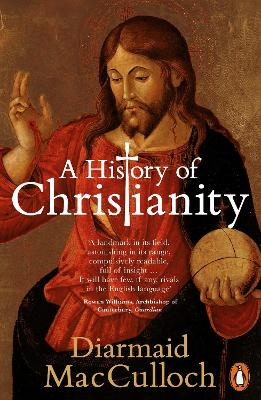 » Have you read this book? We'd like to know what you think about it - write a review about Christianity book by Diarmaid MacCulloch and you'll earn 50c in Boomerang Bucks loyalty dollars (you must be a Boomerang Books Account Holder - it's free to sign up and there are great benefits!)

Diarmaid MacCulloch is a fellow of St. Cross College, Oxford, and professor of the history of the church at Oxford University. His books include Suffolk and the Tudors, winner of the Royal Historical Society's Whitfield Prize, and Thomas Cranmer: A Life, which won the Whitbread Biography Prize, the James Tait Black Prize, and the Duff Cooper Prize. A former Anglican deacon, he has presented many highly celebrated documentaries for television and radio, and was knighted in 2012 for his services to scholarship. He lives in Oxford, England.