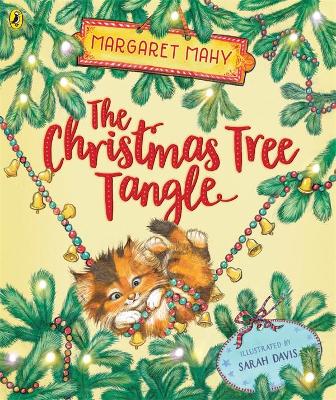 A typically exuberant Christmas story from the beloved Margaret Mahy.

Goodness gracious, what do I see?
The kitten has climbed the Christmas tree!
Climbed so high and climbed so far
To cling with her claws to the Christmas star.

Help! A cute little kitten has managed to scale to the very top of the town's Christmas tree. The cat climbs up to rescue her, followed by the dog, the goat and the pigs. Amid squealing, bleating, barking and mewing, the clever little kitten climbs her way back down the tree, leaving all of her rescuers stuck!

Margaret Mahy is internationally recognised as one of the all-time best writers for young readers, and this exuberant Christmas tale is a festive treasure for every bookshelf. Full of humour, it is sure to delight readers young and old for many years to come.

» Have you read this book? We'd like to know what you think about it - write a review about Christmas Tree Tangle book by Margaret Mahy and you'll earn 50c in Boomerang Bucks loyalty dollars (you must be a Boomerang Books Account Holder - it's free to sign up and there are great benefits!)

Margaret Mahy (Author) Date- 2013-08-06 Margaret Mahy is internationally recognised as one of the all-time best writers for young readers, her books having been translated into all the major languages of the world. Twice winner of the prestigious Carnegie Medal, she also won the Esther Glen Award five times and the Observer Teenage Fiction Award once. Born in a country town in New Zealand, the oldest of a family of five, with over twenty cousins in the surrounding neighbourhood, Margaret Mahy grew up with a strong sense of being part of a close family. She died in 2012. In 1936, the year Margaret Mahy was born, only four books for children were published in New Zealand. Mahy was influential in changing the landscape of children's literature in her homeland - one of the most prolific of authors, she penned over 100 titles. Her output includes poetry, picture books, works for older children, teenage novels, television scripts and stories for magazines and newspapers. Mahy grew up in a close family with five brothers and sisters. Her always vivid imagination made life at school interesting rather than easy. After seeing The Jungle Book, she announced to her astonished seven-year-old classmates that she could talk to animals - 'I had to resort to talking a certain gibberish and eating leaves and drinking out of puddles to prove how close I was to the Animal Kingdom.' She started writing as a young child and admitted to being something of a show-off - 'I can remember carrying my notebooks around in an effort to introduce them into the conversation.' She began writing children's books in earnest at the age of eighteen, whilst training to be a children's librarian. Her big break came fifteen years later - in 1968 - when an American publisher came across the

A Preview for this title is currently not available.
More Books By Margaret Mahy
View All

Shock Forest and other magical stories: A Bloomsbury Reader
$7.99 $9.99