Despite traditionally being a strong research topic in urban studies, inter-city relations had become grossly neglected until recently, when it was placed back on the research agenda with the advent of studies of world/global cities. More recently the 'external relations' of cities have taken their place alongside 'internal relations' within cities to constitute the full nature of cities.

This collection of essays on how and why cities are connecting to each other in a globalizing world provides evidence for a new city-centered geography that is emerging in the twenty-first century. Cities in Globalization covers four key themes beginning with the different ways of measuring a 'world city network', ranging from analyses of corporate structures to airline passenger flows. Second is the recent European advances in studying 'urban systems' which are compared to the Anglo-American city networks approach. These chapters add conceptual vigour to traditional themes and provide findings on European cities in globalization. Thirdly the political implications of these new geographies of flows are considered in a variety of contexts: the localism of city planning, specialist 'political world cities', and the 'war on terror'. Finally, there are a series of chapters that critically review the state of our knowledge on contemporary relations between cities in globalization.

Cities in Globalization provides an up-to-date assembly of leading American and European researchers reporting their ideas on the critical issue of how cities are faring in contemporary globalization and is highly illustrated throughout with over forty figures and tables.

Other Editions - Cities in Globalization: Practices, Policies and Theories by Peter Taylor 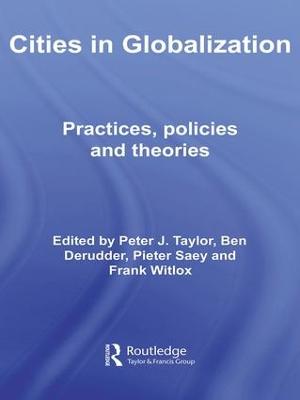 » Have you read this book? We'd like to know what you think about it - write a review about Cities in Globalization: Practices, Policies and Theories book by Peter Taylor and you'll earn 50c in Boomerang Bucks loyalty dollars (you must be a Boomerang Books Account Holder - it's free to sign up and there are great benefits!)


A Preview for this title is currently not available.
More Books By Peter Taylor
View All

AI and the Project Manager: How the Rise of Artificial Intelligence Will Change Your World
$249.48 $252.00

Personal Experiences of Psychological Therapy for Psychosis and Related Experiences
$249.48 $252.00

Make Your Business Agile: A Roadmap for Transforming Your Management and Adapting to the 'New Normal'
$56.42 $56.99

Cities Demanding the Earth: A New Understanding of the Climate Emergency
$58.49 $64.99