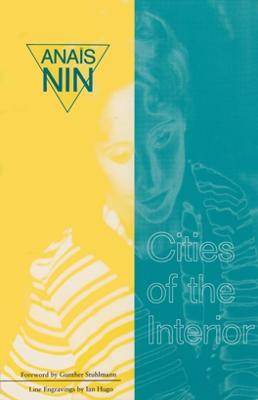 Cities of the Interior

Description - Cities of the Interior by Anais Nin

Ladders to Fire, Children of the Albatross, The Four-Chambered Heart, A Spy in the House of Love, Seduction of the Minotaur. Haunting and hypnotic, these five novels by Anais Nin began in 1946 to appear in quiet succession. Though published separately over the next fifteen years, the five were conceived as a continuous experience-a continuous novel like Proust's, real and flowing as a river.

The full impact of Anais Nin's genius is only to be found through reading the novels in context and in succession. They form a rich, luminous tapestry whose overall theme Nin has called "woman at war with herself." Characters, symbols appear and reappear: now one, now another unfolding, gradually revealing, changing, struggling, growing, and Nin had forged an evocative language all her own for the telling.

"The diary taught me that there were no neat ends to novels, no neat denouement, no neat synthesis," she explains. "So I began an endless novel, a novel in which the climaxes consisted of discoveries in awareness, each step in awareness becoming a stage in the growth like the layers in trees."

Cities of the Interior fulfills a long-time desire on the part of readers, publisher, and Anais Nin herself to reunite the five novels in a single volume.


Book Reviews - Cities of the Interior by Anais Nin

» Have you read this book? We'd like to know what you think about it - write a review about Cities of the Interior book by Anais Nin and you'll earn 50c in Boomerang Bucks loyalty dollars (you must be a Boomerang Books Account Holder - it's free to sign up and there are great benefits!)