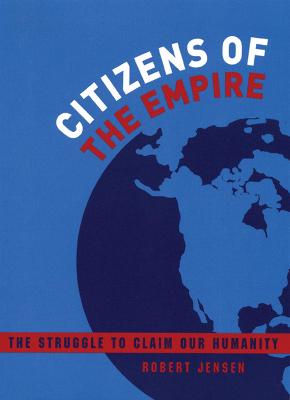 Citizens of the Empire

The Struggle to Claim Our Humanity

Description - Citizens of the Empire by Robert Jensen

As we approach the elections of 2004, U.S. progressives are faced with the challenge of how to confront our unresponsive and apparently untouchable power structures. With millions of antiwar demonstrators glibly dismissed as a "focus group," and with the collapse of political and intellectual dialogue into slogans and soundbites used to stifle protest-"Support the Troops," "We Are the Greatest Nation on Earth," etc.-many people feel cynical and hopeless.

Citizens of the Empire probes into the sense of disempowerment that has resulted from the Left's inability to halt the violent and repressive course of post-9/11 U.S. policy. In this passionate and personal exploration of what it means to be a citizen of the world's most powerful, affluent and militarized nation in an era of imperial expansion, Jensen offers a potent antidote to despair over the future of democracy.

In a plainspoken analysis of the dominant political rhetoric-which is intentionally crafted to depress political discourse and activism-Jensen reveals the contradictions and falsehoods of prevailing myths, using common-sense analogies that provide the reader with a clear-thinking rebuttal and a way to move forward with progressive political work and discussions.

With an ethical framework that integrates political, intellectual and emotional responses to the disheartening events of the past two years, Jensen examines the ways in which society has been led to this point and offers renewed hope for constructive engagement.

Robert Jensen is a professor of media law, ethics and politics at the University of Texas, Austin. He is the author of Writing Dissent: Taking Radical Ideas from the Margins to the Mainstream, among other books. He also writes for popular media, and his opinion and analytical pieces on foreign policy, politics and race have appeared in papers and magazines throughout the United States.

Book Reviews - Citizens of the Empire by Robert Jensen

» Have you read this book? We'd like to know what you think about it - write a review about Citizens of the Empire book by Robert Jensen and you'll earn 50c in Boomerang Bucks loyalty dollars (you must be a Boomerang Books Account Holder - it's free to sign up and there are great benefits!)

Robert Jensen, Ph.D., is a professor of media law, ethics and politics at the University of Texas, Austin. Prior to his academic career, he worked as a professional journalist for a decade.

A Preview for this title is currently not available.
More Books By Robert Jensen
View All

The Restless and Relentless Mind of Wes Jackson: Searching for Sustainability
$53.39 $59.32