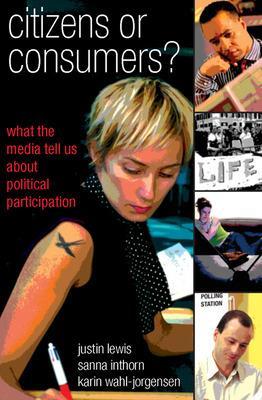 Citizens or Consumers: What the Media Tell us about Political Participation

Description - Citizens or Consumers: What the Media Tell us about Political Participation by Justin Lewis

"In this superb account of how the British and American news mediarepresent everyday citizens and public opinion, the authors show howcoverage of politics and policy debates subtly - even inadvertently - urgepeople to see themselves as and thus to be politically passive,disengaged and cynical. The book's analysis of how journalistsmisrepresent, even invent, public opinion is alone worth the price ofadmission. Written with great verve, passion and unswerving clarity,Citizens or Consumers? promises to become an instant classic in the studyof the failings--and the still untapped promise--of the news media tofurther democracy."
Susan J. Douglas, Catherine Neafie Kellogg Professor and Chair,Department of Communication Studies, The University of Michigan

"Based on an exhaustive cross-Atlantic empirical study, Citizens or Consumers? is an engaging and incisive contribution to a subject usually restricted to cliches and vague generalizations. Looking not only at how media impact upon their audiences, but the manner in which that influence is mediated by the way in which citizenship itself is represented in news stories, Lewis et. al. offer us unusual and keen insight into a familiar world. Written in an engaging and lively style, first year students and experienced faculty members (as well as general readers) will benefit from its many perceptive insights. Especially useful are the last few pages which suggest how journalists might alter their representation practices to invoke citizenship rather than passive consumerism."
Sut JhallyProfessor of Communication, University of Massachusetts at AmherstFounder & Executive Director, Media Education Foundation

"The two great duelists for our attention - citizens and consumers - are locked in a struggle for the future of democracy. Citizens or Consumers? offers its readers a sharp lesson in how the media highlight and distort that struggle. It's the kind of lesson we all need."
Toby Miller, author of Cultural Citizenship.

In recent years there has been much concern about the general decline in civic participation in both Britain and the United States - especially among young people. At the same time we have seen declining budgets for serious domestic and international news and current affairs amidst widespread accusations of a "dumbing down" in the coverage of public affairs. This book enters the debate by asking whether the news media have played a role in producing a passive citizenry. And, if so, what might be done about it?

Based on the largest study of the media coverage of public opinion and citizenship in Britain and the United States, this book argues that while most of us learn about politics and public affairs from the news media, we rarely see or read about examples of an active, engaged citizenry.

Key reading for students in media and cultural studies, politics and journalism studies.

Buy Citizens or Consumers: What the Media Tell us about Political Participation by Justin Lewis from Australia's Online Independent Bookstore, Boomerang Books.

Book Reviews - Citizens or Consumers: What the Media Tell us about Political Participation by Justin Lewis

» Have you read this book? We'd like to know what you think about it - write a review about Citizens or Consumers: What the Media Tell us about Political Participation book by Justin Lewis and you'll earn 50c in Boomerang Bucks loyalty dollars (you must be a Boomerang Books Account Holder - it's free to sign up and there are great benefits!)

Professor Justin Lewis is Professor of Communication and Deputy Head of the School of Journalism, Media and Cultural Studies at Cardiff University. He joined Cardiff in 2000, having worked for 12 years in the United States at the University of Massachusetts. He has written or edited 8 books about media and politics, his most recent being Constructing Public Opinion, published by Columbia University Press. He has, in recent years, been particularly interested in media and democracy, with an emphasis on public knowledge and opinion. Karin Wahl-Jorgensen is a Lecturer in the Cardiff School of Journalism, Mediaand Cultural Studies. She is interested in the relationship between journalism,citizenship and democracy. She has recently completed the book, Journalists and the Public: Letters to the editor, citizen participation and democracy (HamptonPress), and her work has appeared in more than 20 international journals. Sanna Inthorn is Senior Lecturer in Media Studies at the University of Portsmouth. She researches and teaches on media representations of national, ethnic and civic identites. Her work has appeared in the European Journal of Cultural Studies, Journalism Studies and the Media Wales Journal.

A Preview for this title is currently not available.
More Books By Justin Lewis
View All

Constructing Public Opinion: How Political Elites Do What They Like and Why We Seem to Go Along with It
$164.66 $182.95

Beyond Consumer Capitalism: Media and the Limits to Imagination
$33.26 $36.95