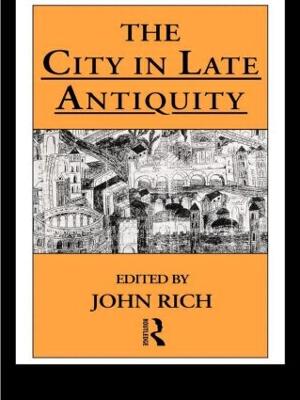 The City in Late Antiquity

Description - The City in Late Antiquity by John Rich

The Roman Empire in its early centuries was a world of cities, dominated by landowning elites and conforming to a common pattern in their institutions, buildings and culture. What became of the cities after the crisis of the third century, and later when the Empire collapsed under outside pressure? In this volume archaeologists and historians bring together their two disciplines in addressing this complex question. In the introductory chapter the problem is discussed as a whole, while the remaining chapters focus on particular aspects and regions. The classical city has often been portrayed as in decline everywhere by the fourth century. This book shows that this picture is too simple - that in some regions, such as Africa, old customs were still vigorous while elsewhere, for example in Britain, urban life disappeared and the cities survived only as fortresses, if at all. Particular attention is paid to the impact of the Christianization of the Empire on the cities. Many Roman towns survived through mediaeval times and up to the present day.
The last two chapters examine the continuities between antiquity and the Middle Ages in the physical fabric and ideology of two very different regions. Contributors: Dr P.W. Dixon, University of Nottingham; Dr J.D. Harries, University of St. Andrews; Dr H. Kennedy, University of St. Andrews; Dr Christina La Rocca, I

Other Editions - The City in Late Antiquity by John Rich Book Reviews - The City in Late Antiquity by John Rich

» Have you read this book? We'd like to know what you think about it - write a review about City in Late Antiquity book by John Rich and you'll earn 50c in Boomerang Bucks loyalty dollars (you must be a Boomerang Books Account Holder - it's free to sign up and there are great benefits!)


A Preview for this title is currently not available.
More Books By John Rich
View All

A Dramatick Entertainment, Call'd the Necromancer: Or, Harlequin, Doctor Faustus as Perform'd at the Theatre Royal in Lincoln's-Inn-Fields the Third Ed to Which Is Prefix'd, a Short Account of Doctor Faustus
$34.71 $38.57

The Spirit of Contradiction. a New Comedy of Two Acts, as It Is Acted at the Theatre-Royal in Covent-Garden. by a Gentleman of Cambridge. the Second Edition.
$34.71 $38.57