City of Devils: A Shanghai Noir

Description - City of Devils: A Shanghai Noir by Paul French

1930s Shanghai could give Chicago a run for its money. In the years before the Japanese invaded, the city was a haven for outlaws from all over the world- a place where pasts could be forgotten, fascism and communism outrun, names invented, fortunes made - and lost.
'Lucky' Jack Riley was the most notorious of those outlaws. An ex-Navy boxing champion, he escaped from prison in the States, spotted a craze for gambling and rose to become the Slot King of Shanghai. Ruler of the clubs in that day was 'Dapper' Joe Farren - a Jewish boy who fled Vienna's ghetto with a dream of dance halls. His chorus lines rivalled Ziegfeld's and his name was in lights above the city's biggest casino.
In 1940 they bestrode the Shanghai Badlands like kings, while all around the Solitary Island was poverty, starvation and genocide. They thought they ruled Shanghai; but the city had other ideas. This is the story of their rise to power, their downfall, and the trail of destruction they left in their wake. Shanghai was their playground for a flickering few years, a city where for a fleeting moment even the wildest dreams seemed possible.
In the vein of true crime books whose real brilliance is the recreation of a time and place, this is impeccably researched narrative non-fiction told with superb energy and brio, as if James Ellroy had stumbled into a Shanghai cathouse.

Other Editions - City of Devils: A Shanghai Noir by Paul French 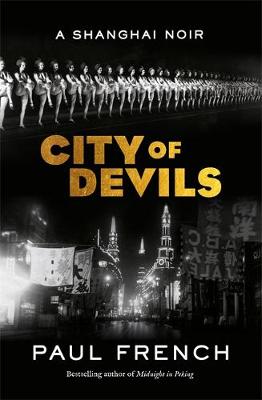 » Have you read this book? We'd like to know what you think about it - write a review about City of Devils: A Shanghai Noir book by Paul French and you'll earn 50c in Boomerang Bucks loyalty dollars (you must be a Boomerang Books Account Holder - it's free to sign up and there are great benefits!)

Born in London and educated there and in Glasgow, Paul French has lived and worked in Shanghai for many years. He is a widely published analyst and commentator on China and has written a number of books, including a history of foreign correspondents in China and a biography of the legendary Shanghai adman, journalist and adventurer Carl Crow. His book Midnight in Peking was a New York Times Bestseller, a BBC Radio 4 Book of the Week, and will be made into an international miniseries by Kudos Film and Television, the UK creators of Spooks and Life on Mars.

A Preview for this title is currently not available.
More Books By Paul French
View All

Betrayal In Paris: How The Treaty Of Versailles Led To China's Long Revolution: Penguin Specials
Available, ships in 7-10 business days
$8.49 $9.99

Early Detection and Cognitive Therapy for People at High Risk of Developing Psychosis
No Stock on Hand, Supplier Has No Due Date for Supply.
$155.66 $172.95