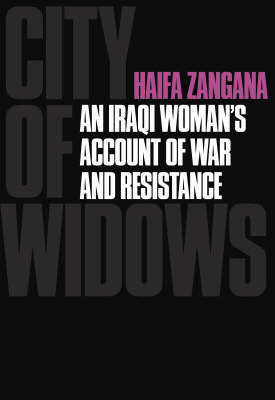 Haifa Zangana, a former political prisoner of the Ba'ath regime, is the first writer to put the plight of Iraqi women in context. She traces a long line of daring and vocal activists, resisting foreign aggression and despotism for the past 100 years, from a handful of turn of the century poets to 1960s activists in armed struggle and the suicide bombers of today. Addressing the stark reality of Iraq under occupation, Zangana reveals Baghdad as a city of widows, where more than 300 000 women, their regular lives destroyed, have been left to head households.

Other Editions - City Of Widows by Haifa Zangana » Have you read this book? We'd like to know what you think about it - write a review about City Of Widows book by Haifa Zangana and you'll earn 50c in Boomerang Bucks loyalty dollars (you must be a Boomerang Books Account Holder - it's free to sign up and there are great benefits!)

HAIFA ZANGANA is an Iraqi political commentator, novelist, and former prisoner of Saddam Hussein's regime. She is a weekly columnist for al-Quds newspaper and a commentator for the Guardian, Red Pepper, and al-Ahram Weekly. She lives in London.

A Preview for this title is currently not available.
More Books By Haifa Zangana
View All