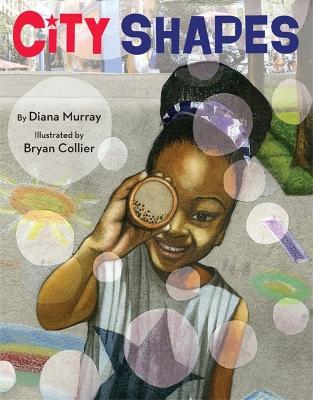 A truck rumbling by to deliver the mail,a silvery cart with hot pretzels for sale,and stacks of brown packages hauled up the stairs...Some shapes in the city are... on-the-go squares!City Shapes is an ode to city life, depicted from the points of view of a young girl walking through her neighborhood and a bird flying high above, both spotting dazzling shapes in every scene they pass. From the shimmering skyscrapers to the bustling marketplace, the kites flying free in the sunlight to the stars shining bright at night, everyday scenes become extraordinary. Diana Murray's playful and poetic verse encourages readers to look for shapes everywhere, noticing the hidden details in even the simplest of scenes around them every day. And Bryan Collier's beautiful illustrations add even more layers to the cityscapes, letting readers get immersed in the hustle and bustle, culminating in a thrilling twist when the girl looks through her kaleidoscope and sees the skyline in a completely new way. A celebration of finding magic in scenes both new and familiar, City Shapes has the potential to become a classic.

» Have you read this book? We'd like to know what you think about it - write a review about City Shapes book by Diana Murray and you'll earn 50c in Boomerang Bucks loyalty dollars (you must be a Boomerang Books Account Holder - it's free to sign up and there are great benefits!)

Diana Murray is an award-winning writer of stories and poems for children. She is the author of Grimelda, The Very Messy Witch and several other picture books. Her poems have appeared in many magazines, including Highlights for Children and Spider. She grew up in New York City and still lives nearby with her firefighter husband, two children, a goldfish, and a bearded dragon. One of Diana's favorite shapes is a blank rectangle of paper. Bryan Collier has illustrated more than twenty-five picture books, including the award-winning Dave the Potter, Knock Knock, and Fifty Cents and a Dream, and has received numerous awards, including three Caldecott Honors and five Coretta Scott King Awards. He lives with his wife and children in Marlboro, New York.