The topic of civil-military relations has high significance for academics, for policy makers, for military commanders, and for serious students of public policy in democratic and other societies. The post-Cold War and post-9-11 worlds have thrown up traditional as well as new challenges to the effective management of armed forces and defense establishments. Further, the present century has seen a rising arc in the use of armed violence on the part of non-state actors, including terrorists, to considerable political effect. Civil-military relations in the United States, and their implications for US and allied security policies, is the focus of most discussions in this volume, but other contributions emphasize the comparative and cross-national dimensions of the relationship between the use or threat of force and public policy. Authors contributing to this study examine a wide range of issues, including: the contrast between theory and practice in civil-military relations; the role perceptions of military professionals across generations; the character of civil-military relations in authoritarian or other democratically-challenged political systems; the usefulness of business models in military management; the attributes of civil-military relations during unconventional conflicts; the experience of the all-volunteer force and its meaning for US civil-military relations; and other topics. Contributors include civilian academic and policy analysts as well as military officers with considerable academic expertise and experience with the subject matter at hand.

Other Editions - Civil-Military Relations in Perspective by Stephen J. Cimbala 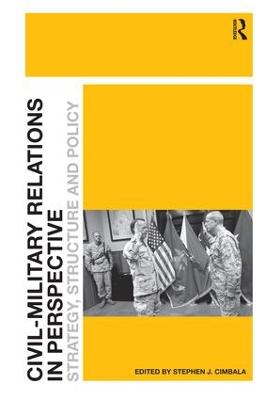 » Have you read this book? We'd like to know what you think about it - write a review about Civil-Military Relations in Perspective book by Stephen J. Cimbala and you'll earn 50c in Boomerang Bucks loyalty dollars (you must be a Boomerang Books Account Holder - it's free to sign up and there are great benefits!)